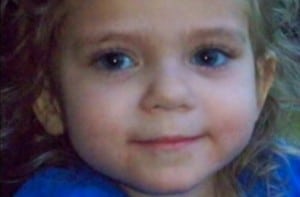 When four year old Naomi Johnson nearly drowned almost a year ago, chances of her surviving the ordeal was close to nil. But after months of treatment, the little girl has survived and despite doctor’s warning is smiling, laughing and talking.

“She has been through more in her four years, than many people go through in their entire life,” said her father, Chris Johnson.

In May 2011 just a few days after the Johnson’s finalized their adoption of Naomi, the toddler was at their Orangeburg home, where they had recently move and that came with an old empty, fenced off in-ground pool.

Wendy, Naomi’s mother recalls that her two grandsons had come that day and were playing with the girl.

“My two grandsons were over [at the house] with Naomi, playing, and they went outside to go out on the playground,” she said. “My oldest grandson runs in a few minutes later to tell me, ‘Nanny baby’s in the pool.'”

Wendy believes that one of the boys may have thrown Naomi’s toys in the standing rainwater and that’s when she went into the pool.

“So I jumped up and ran out and didn’t realize at the time that my 14 year-old was right behind me,” said Wendy.

As the mom panicked the 14 year old began CPR.

Naomi was taken to Regional Medical Center in Orangeburg before the pediatric ambulance from Palmetto Health Children’s Hospital was dispatched.

In the ambulance nurses used a cooling treatment and resources, unique to this Pediatric Intensive Care Unit.

“We were doing everything we could,” said Jill Peake, a registered respiratory therapist at Palmetto Health Children’s Hospital. “And not knowing how long she had been underwater, breathing in the pool water that was not clean.”

In Columbia, doctors did not have good news to share with the family.

They told us it was just wait and see,” said Wendy. “That they had never had anybody survive…she had been down for 25 minutes without oxygen on her brain.”

The toddler was in coma and on life support for 11 days. Doctors told her parents that she would not be able to walk or talk if she survived.

“If you would have heard what the doctors had to say in the tone that they said it in… they couldn’t save Naomi. They admitted it,” said Chris. “But I do think the power of Christ through those doctors saved Naomi.”

The little fighter finally regained consciousness. It was the biggest day of the Johnson’s lives.

“We didn’t walk off of PICU, but ‘daddy’ carried us down to the third floor,” said Wendy.

After rehab began it was estimated that the toddler would need at least a year to walk again but she amazed everyone by taking her first step in just 3 weeks.

She continued rehab at home but formed a special bond with a therapist at Palmetto Health Children’s Hospital so the parents started making the 45 minute drive to Columbia again back in December.

“Each time she comes in she’s doing something better,” said Naomi’s physical therapist, Sophia Wijthoff of Palmetto Health Children’s Hospital. “We’ve progressed so quickly that now my goals for her are for her to walk on her own.”

Her father is proud of her little brave heart.

“She’s just not getting better…she’s thriving,” said Dad, Chris. “We don’t think she’ll recover fully, we know she will. She’s going to be a testament. She’s going to be a miracle baby that will speak to the world of God’s grace. His healing. I can’t wait for it either.”

Chris is currently working on a book on Naomi’s story called “Finding Faith.” Faith is actually Naomi’s middle name which was given to her by her biological parents before the Johnson’s took Naomi into foster care at three weeks old.