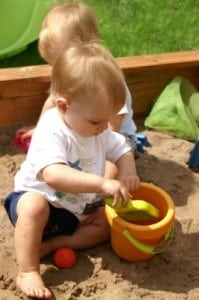 Have you ever noticed that some children share so much better than others? Have you ever wondered why? Researchers are now saying that it could be because toddlers develop a sense of fairness a lot sooner than originally thought.

Their speculations are based on a small study in which 47 babies were observed. Each of the 15-month-old infants was shown two videos while sitting with their parents. One video featured equal distribution and non-equal distribution of crackers. The other featured the same scenario, only with milk.

There were also noted differences in altruism in the infants. Each child was given a choice between a simple LEGO block and a LEGO toy doll. One-third of the infants were willing to share their toy of choice – these infants were called “altruistic sharers.” Another third shared the toy they didn’t choose – they were called “selfish sharers.” The final one-third didn’t share at all and the researchers attributed this to shyness around strangers.

What was most intriguing about the study was when the researchers took a look at both of the studies as a whole. The researchers found that 92 percent of the infants that shared their preferred toy had also spent more time watching the unequal food division. In the “selfish sharer” group, 86 percent had spent more time observing the equal distribution of food.

“The altruistic sharers were really sensitive to the violation of fairness in the food task,” Sommerville stated. “Selfish sharers” seemed to exhibit the opposite behavior.

“Our findings show that these norms of fairness and altruism are more rapidly acquired than we thought. These results also show a connection between fairness and altruism in infants, such as the babies who were more sensitive to the fair distribution of food were also more likely to share their preferred toy,” stated Sommerville.

Researchers believe that the study could help to lead parents and caregivers to better ways of teaching sharing and cooperation among young children. Of course, there is still more research to be done but the premise and results of the study are still rather intriguing.