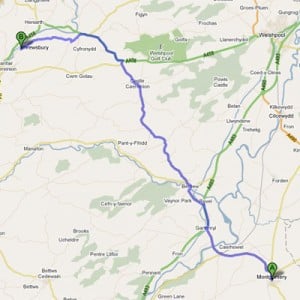 No one would ever expect a toddler to board a city bus alone but in Montgomery, England on Monday morning, that is exactly what happened. A two-year-old toddler boarded a local city bus at a Montgomery bus stop alone. No one noticed, however, that he was not with an adult. Everyone, including the driver, assumed that he belonged to someone boarding the bus. It was not until 28 miles later, at the final stop in Shrewsbury that the riders and driver realized that something was amiss.

The youngster, who had spent the entire ride on the back of the bus conversing with teenagers and other passengers, was still sitting there while the passengers started to unload at the Shrewsbury bus stop. The driver noticed the little boy still on board and started to ask passengers about the child. All of the passengers denied any ownership to the child. It was then that everyone present realized that the toddler was alone.

Immediately, the driver contacted the local police department. The driver and remaining passengers did everything possible to try and keep the child comfortable while they waited for the authorities to arrive. Reportedly, he was not too distraught by the time the officers arrived.

It is still unsure how it is that the child managed to make it on the bus on his own. More curious, until more facts are released, is how this little boy toddled down the local streets and managed to stay safe. At this time, the only information released about the child’s strange adventure was that two adults had been taken into custody and questioned. There is no word as to whether or not these individuals were his parents. One thing is for sure, the bus driver will be checking children that board his bus for an accompanying adult from now on!