Thanks to a quick thinking neighbor, a toddler was saved from being hit by a tree trunk that was just about to fall on their house roof. The little girl was sleeping in her second floor room when the tree split into two and hit the roof Monday night. 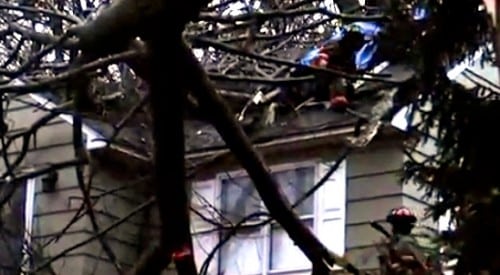 Sue Clark had stepped out of her home when she noticed an Ash tree that was swaying back and forth in the high wind was about to fall on the roof of a neighbour’s house.

She immediately called Kim and Damian Espositos’ to warn them, which gave Kim time to grab her daughter Samantha who was sleeping in her second floor room.

“She was still asleep, so I picked her up and we ran to get as far from where we thought the tree was going to hit as possible,” Kim said.

Moment’s later a 15-foot section of the tree crashed into the bedroom and Kim says it felt like a small explosion. The whole house shook.

“I don’t even want to think what would have happened if she was still in her crib,” Kim said.

Sue saw the whole incident and said it felt like everything was happening in slow motion.

Firefighters said wind gusts associated with Hurricane Sandy were reaching about 50 mph when the incident call came in around 5:30 p.m. 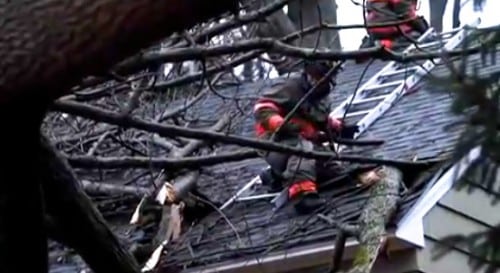 The road was closed for more than an hour as the firefighters worked to remove the tree trunk from the house.

Kim told the Berkshire Eagle that two months ago while the family was away on vacation a pipe had burst and flooded their home. The renovation work had completed just 10 days ago.

“Of course, this is going to happen to my house,” she said. “Luckily, I have great neighbors.”