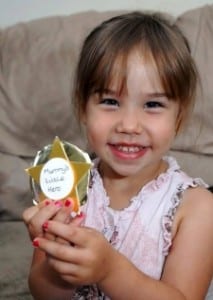 Sarah Millard will be thankful to her daughter for a very long time. At an age when kids are not expected to understand life threatening situations, her three year old daughter Brooke Smith not only remained calm when her mom collapsed on her bed, she even knew the exact thing to do to save her life.

23 year old Sarah lives in Thames Road and suffers from type I diabetes. She was at home with Brooke and her 15 month old baby when her sugar level dipped suddenly causing a condition called hypoglycemia.

Brooke was following her mother around, when she suddenly saw her collapse on the bed. The toddler immediately ran downstairs to get the pills from her mom’s handbag. She fed them to her preventing her from going into a seizure or a coma.

Brooke then locked the front door, switched off the television and climbed on a laundry basket to give her younger sister Miyah a drink when she woke up.

“It is amazing. My handbag was in the living room. She went and got my handbag, got what she was looking for and came into the bedroom. She put the covers over me and tucked me in. When I eventually started to come around, she had locked the front door and turned the TV off,” said the proud mother.

“I am really proud of her. Her nursery really praised her and I made her a badge saying ‘Mummy’s little hero’. Since then she has just kept saying ‘Am I your superhero?’”

Sarah has been dealing with diabetes since she was 13 years old. She says she has experience hypoglycemia before but never thought it could be so severe.

Hypoglycemia usually occurs suddenly when the body’s blood sugar level falls dangerously low. It might occur due to change in diet or increased activity. Usually the person feels relief by eating a glucose rich food like a fruit, bread, rice or sweets.  Sarah believes her attack came because of a delayed meal time.

“I normally get warning signs of feeling shaky. When I am completely gone, it will be like I’m drunk. I am not in control and I get really snappy. But this time I was in my bedroom putting some washing away. Brooke had followed me in there. I sat down on the bed, and that was it.

“I wasn’t unconscious, but I wasn’t completely aware of what I was doing. I couldn’t tell her where my tablets were or what to do.”

The mother thinks that Brooke learnt what to do by observing her grandmother Janine when Sarah previously had an attack. At that time, she thought she was too young to understand.

“I didn’t really think she had been paying much attention. I thought she would have been too young to understand and I hadn’t explained it to her, but she must have been watching.”

Janine adds, “I am so proud of Brooke. If it had not been for her invention things could have been a lot worse. She is such a little star.”

Brooke’s actions have been praised by many including the staff at her nursery St John’s Little Learners.