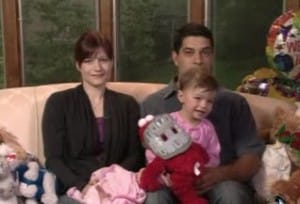 Rachel and Anthony LaFauci have a lot to be thankful for today after their two-year-old daughter survived being pinned under their SUV, walking away with just a scratch.

Sophia’s mom, Rachel had just moved her vehicle out of the garage when she saw two tiny legs sprawled right under the tire.

Two-year-old Sophia was pinned on her back with the tire rolled up on her right leg, while the weight rested on her tiny body.

While trying to stay calm, Rachel gentle rolled the vehicle off of her daughter and then screamed her name.

The amazing tot responded simply with a quiet ‘mommy’.

The panicked mom said her daughter looked purple, and within minutes emergency officials had arrived.

“When we arrived the child was stripped to the diaper, had some obvious marks from the tire on her body,” said paramedic Erik Boie. “There appeared to be tire marks running length wise from the left side to her right arm.”

“We got an IV into her leg and gave her some oxygen. And I believe within 10 to 15 minutes of us arriving, she was in a helicopter on her way to Boston,” said paramedic Donald Mejia.

At the hospita,l doctors found that, not only was Sophia fine, but incredibly, she had no broken bones, no internal injuries and barely a scratch.

According to kidsandcars.org , Sophia is one of the lucky ones. More than 2,400 children visit emergency rooms each year after being struck by or rolled over by a vehicle backing up.

Good Morning America’s medical contributor Dr. Marie Savard credited her survival to the relative “elasticity” of the toddler’s soft tissue, but her parents have a simpler explanation: it was a miracle.