In a powerful Facebook post that has gone viral, a mother of two warns about what can happen when a toddler plays on a trampoline. Sadly, Kait Ellen knows about that danger because of what happened to her 3-year-old son Colton. 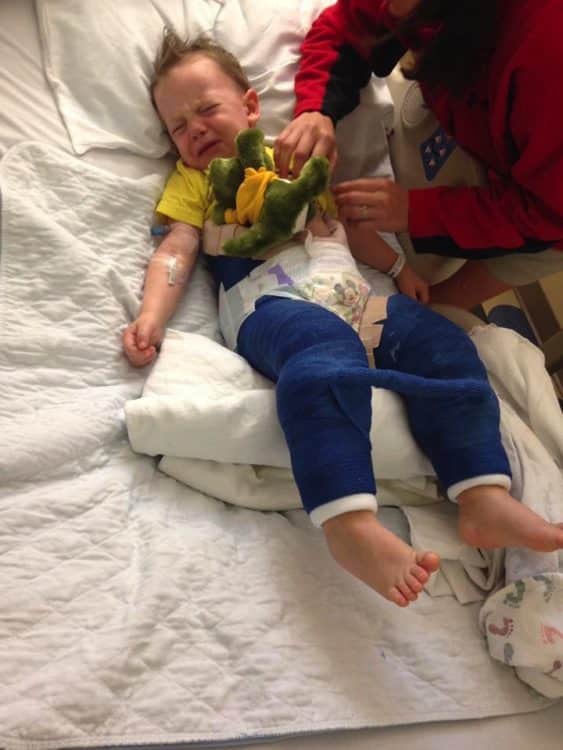 After Colton’s accident, Ellen found out that both the American Academy of Pediatrics and the American Academy of Orthopedic Surgeons strongly recommend that children under the age of six never play on a trampoline because their fragile bones cannot withstand the repetitive pressure of jumping. She was shocked to have this information confirmed by the pediatric orthopedic surgeon who cared for her son during his hospitalization.

In the viral post Kait showed a photo of Colton in a cast spanning from ankle to waist. Colton was happily bouncing on a trampoline – in an adjacent square to his parents – when an awkward fall caused him to break his femur, the strongest bone in the human body.

Indoor trampoline facilities often advertise “toddler times” and it seems like a fun activity if you are unaware of potential dangers. But Kait Ellen says that her post is about sharing a story that will hopefully prevent another family from experiencing the trauma hers is now going through.

She says that her life has been “turned upside down” since Colton’s injury. Every day is a struggle for her 3-year-old son as he adjusts to life in a hip spica cast that he must be in for at least the next six weeks.

That period of time seems endless to a previously active toddler, and Kait thinks knowledge of the danger is key to preventing a similar injury to other children.

Until a toddler’s bones have developed and strengthened, activities like jumping on a trampoline or going down a slide can have painful consequences parents need to be aware of.