Home » Toddler Walks a Half Mile Home after Escaping from Nursery! 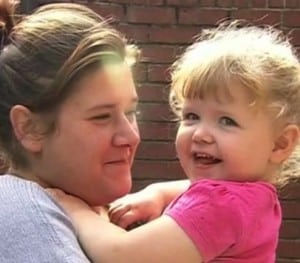 Our children are our most prized possessions, and when we drop them off at school or at daycare, we expect them to be treated that way. Unfortunately, Samantha O’Connor, a mother from Runcorn, Cheshire, says her daughter didn’t receive that extra special care. And who could argue with her after her daughter, little Louise Hilton, managed to escape and walk a half a mile home by herself?

Bright and fearless little Louise was apparently permitted to go to the bathroom alone, and it’s suspected that, while in the restroom, she found a door left open by one of the daycare workmen. Out it she went, and then she trekked past woodlands, over a canal bridge and across a busy roundabout before finally making it to her front door.

“Louise is quite bright and she was allowed to go to the toilet by herself where she spotted an open door and got out….We were absolutely stunned to hear a knock on the door and see our little Louise standing there,” Samantha told Click Liverpool. “She was banging on the door shouting, ‘Mummy, Mummy, I’m home!’ Anything could have happened to her. It’s a quarter of an hour walk home. Louise had to walk past woods, a canal and a busy roundabout to our door.”

As you can imagine, the mother was grateful that her daughter made it home safely, but she wants the daycare workers responsible for her daughter’s care to be let go.

“We could have been dealing with a tragedy. Thank God she made it home safely,” she said. “The security and staff at the nursery are a total shambles. They should all be sacked as they clearly can’t do their job properly. I want them to feel sickened to the stomach like I did – they clearly don’t care about the kids in their care.”

Though the daycare refused to give a statement, Cheshire Constabulary confirmed the report filed regarding Louise’s escape.

“We are aware of an incident involving a two-year-old girl who left a Runcorn nursery and walked home alone,” the spokesperson told Click Liverpool. “She arrived back at her parent’s home, after lunch, at around 1:50 p.m. At this stage of the investigation it is believed the child escaped after workmen left a door open. The child was unharmed and the matter has been referred to the local authority.”

“The council has been providing advice and support to the nursery following the notification of the incident,” a spokesperson for Halton Borough Council told Click Liverpool.

Hopefully, whatever comes of this situation, the center never has an incident like this again.