Home » Toddlers Can Do Basic Math 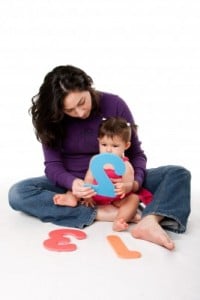 Math is usually considered one of the harder subjects to learn, but a new study says even toddlers can do it. Children as young as 18-months may be able to recognize basic math and counting.

Counting is usually not mastered until a child reaches age four. But a new study says even toddlers can recognize counting and have already begun learning the basic of simple math. Professor Virginia Slaughter, of the University of Queensland, and his colleagues lead the study which looked at if toddlers could grasp the abstract principles behind basic counting.

The study involved 36 toddlers who were shown a video featuring fish that were being counted. The 18-month old toddlers seemed very interested in watching the counting sequence, more so than younger toddlers who also watched the video.

“These findings demonstrate that humans begin to learn to count earlier than previously thought, based on exposure to their cultural counting routine.”

Exposing young toddlers to counting and basic math may help them to grasp the abstract concepts involved more quickly. Because basic counting is such a big part of our culture, toddlers may be mimicking what they are seeing, and thus pick up on the concepts more quickly.

Though true counting does not start until sometime around age two, and is not mastered until around age four, learning the abstract concepts behind counting at an early age helps toddlers prepare for what they are about to learn. Learning to count may be a longer process than researchers previously expected.

“Our data suggest that between the ages of 15 and 18 months, infants begin to learn the abstract principles governing correct counting via exposure to their cultural counting routine.