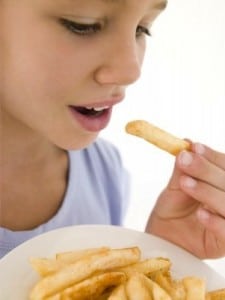 According to US nutrition guidelines, children should eat at least five servings of fruit and vegetables each day. However for some, they are filling up on unhealthy versions instead.

French Fries, according to a survey by Nestlé Feeding Infants and Toddlers Nutrition Study (FITS), are the vegetable toddlers are eating the most of. While they are potato based, the heavy grease and salts that coat most fries hardly make them an acceptable vegetable replacement. In an era where more people dine out than eat at home, it stands to reason that the effect would trickle down to toddlers and young children.

The survey also found that 75 percent of toddlers are consuming more saturated fat than required each day.

As eating habits are being formed at such a young age, it is distressing to see so many children being fed poor diets. Especially as the foods they eat now may lead to future health problems. – Summer, staff writer