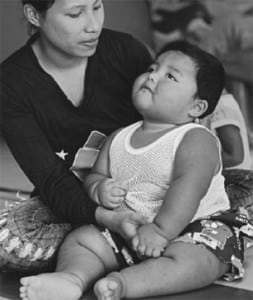 The average weight of a 13 month old is about 10 kg or 27.7 pounds, but one toddler in Malaysia has shocked his parents and doctors by weighing a staggering 17.6 kg or about 38.8 pounds. Doctors believe the baby might be suffering from a rare genetic disorder.

Kyairiel Mikhail Khairul Shafiq was born January last year weighing a normal 2.7 kg at birth. But much to the surprise of his parents, their youngest son’s weight began to increase drastically after he was treated for a lung infection at shortly after he was born and was discharged.

His mom Yusnurlina Mohd Yusoff, a 25 year old house wife is now worried that this unusual obesity and his frequent seizure attacks could affect Kyairiel Mikhail’s brain development. His eyes already have trouble focusing, even at close range.

“At first, we thought it was common seizures but it grew more intense. He began having as many as eight seizure attacks a day.”

His mom says doctors have performed many tests to determine the reason behind her son’s weight gain including Magnetic Resonance Imaging (MRI) scans and blood tests but they have found him to be normal.

Khairul Shafiq Nor Azmi, 27 the boy’s father adds that a month ago he weighed 18.1 kg but now the weight has gone down a bit.

When Khairal was 25 days old, he was admitted to the hospital and treated for a lung infection. It is after this infection that the weight gain began according to the family. Doctors believe that Mikhail may have a rare overgrowth syndrome.

Because of his giant size the baby boy has difficulty sitting, standing, moving, turning without help and his parents too cannot carry him for too long.

“We can only put him in a prone position. When he is tired of lying down, he would cry to be picked up and we would try to help him sit with support,” said Khairul

His father also says that the boy has trouble breathing so they prefer not to take him out of the house and tire him.

“With our current situation, I am asking for help from anyone for our son’s medications and daily necessities, especially milk and diapers,” says Khairul, who works in a supermarket.

The family is hoping to get a special stroller for the child, but needs help with costs.