Home » Tori & Dean Spend The Day Out With Their Kids

Dean McDermott and wife Tori Spelling were spotted enjoying a family day out with their 4 kids on Mother’s day Sunday. While each carrying a child, the couple strolled with their oldest kids Liam and Stella in Los Angeles. 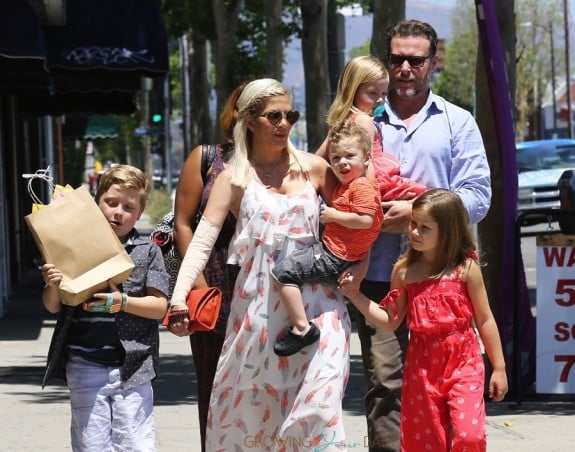 While on the red carpet at WE tv’s Ian Ziering’s “Pet Project” event last week the couple told Us Weekly that their bond is stronger than ever following his 2013 affair.

Tori echoed that statement in a tweet she sent out on Thursday to commemorate their 9th anniversary.

Dean revealed to US Magazine later that evening that he thought the line — ‘Mistakes are just moments if you don’t let them define you’ — was ‘brilliant’.

We are happy to see they’re back on track! They have a beautiful family and it would be a shame to see that torn apart by one senseless evening.