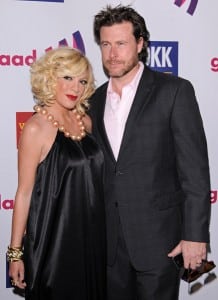 Congratulations to Tori Spelling and Dean Mc Dermott on the safe arrival of their third child – a girl!

The new mom announced the exciting news on twitter this morning saying,

On Saturday Tori tweeted that the family was doing last minute preparations and also trying to predict when the baby would arrive.

Dean is the winner!

The sex of the baby was probably a surprise to the former 90210 star.  She recently revealed she was expecting to have a boy.

“My gut says boy, and we have a boy’s name that we’re pretty set on.”

Is it possible that the couple isn’t done having babies?  Tori continued saying,

“Whatever we have, we’ll go for the opposite on the fourth one. If we are able to have another child, that would be amazing!”

Tori was very great while she was pregnant!  Here is a look back at some of photos from the last few months.