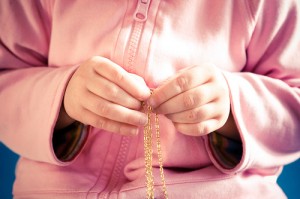 A probe by the U.S. product safety authorities has found that some manufacturers are replacing the lead in their toys and jewelry with the toxic cadmium. This dangerous metal can hinder brain development in young children and is a known carcinogen. Children need only suck or chew on the pieces to receive low doses.

After the use of lead in children’s toys was discovered the U.S. Consumer Product Safety Commission has continued to test and review children’s toys and products coming out of China. After testing some play jewelry that had been imported from China they found that the toxic metal cadmium was being used instead. Some pieces were almost entirely made of cadmium, being 91 percent by weight. They were also found to easily shed the toxin into children.

Bruce A. Fowler, a toxicologist with the U.S. Centers for Disease Control and Prevention, was quoted, “There’s nothing positive that you can say about this metal. It’s a poison.”

The AP did independent testing on jewelry bought from New York, Ohio, Texas and California. They found that at least 12 percent of the jewelry contained at least 10 percent cadmium by weight. Jewelry charms bought from Wal-Mart, Claire’s, and a dollar store were among the most dangerous. Pendents from “The Princess and The Frog” movie were found to have dangerous amounts of cadmium in them.

According to the CDC’s priority list of 275 most hazardous substances, cadmium is ranked number 7. However jewelry manufacturers in China say the metal has been used for years in China. When the U.S. passed the Consumer Product Safety Improvement Act of 2008 many Chinese toy companies had to find a replacement for lead that could be exported. Standards limiting the use of cadmium were set in painted toys, however the CPSI act did not cover jewelry. To date there had not been a recall of cadmium products in the US.

Xu Hongli, a cadmium specialist in Beijing, says the toxic mental is fairly common among toys and jewelry in China, despite manufacturers being aware of the risks. “Usually, though, they are more careful with export products,” she stated.