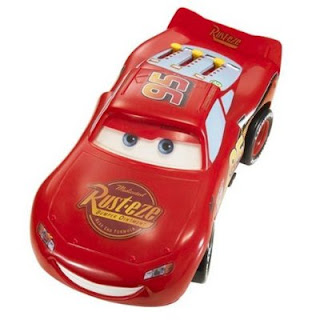 Disney’s Cars Walkin’ Talkin’ Lightning McQueen has been a popular guy around our house these days.

Now that my son is hooked on the movie, we have had to re-decorate and add some of the toys to our collection!

From the moment that he arrived, my son has been taking him with us everywhere. He loves the phrases that the car says and the fact that it moves side to side unlike his other cars in his collection.

When designing him, Mattel put a pivot mechanism in the middle of the car, which allows him to swing back and forth like a fish and do circles. 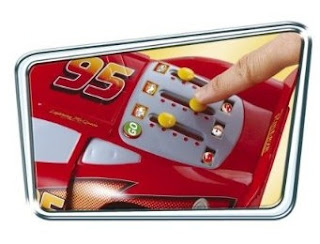 How it works: Walkin’ Talkin’ Lightning McQueen features 3 levers on the back that give your child complete control of what happens next.

Each lever has 5 settings that make the car move in different directions, blurt out various sayings and roll his eyes. In total he says more than 25 sounds and phrases.

Having so many choices makes Lightning McQueen a toy that keeps my son happy for hours.

All he has to do is set the sequence buttons on the back and watch him go – over and over again! No remote controls to fumble with or loose.

The funniest part about this car is when the car hits the side of the couch or the wall, it responds by saying “hey, I’m built for speed, not crashing” or “ouch, watch the face”.

Battery life: We have been playing with Lightning McQueen for about 3 weeks now and he is still running on the batteries that came with him. We now have a set on hand, just in case he conks out on us without warning…

Cars are normally a toy that are bought boys, but I think that Walkin’ Talkin’ Lightning McQueen could be a hit with girls as well. His ability to do a ton of things will make any child (over 4) happy.