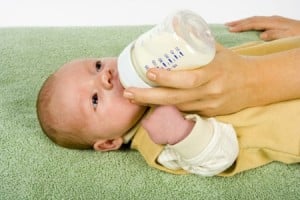 A government study has found traces of a chemical used in rocket fuel were found in samples of powdered baby formula, and could exceed what’s considered a safe dose for adults if mixed with water also contaminated with the ingredient.

The study by scientists at the U.S. Centers for Disease Control and Prevention looked for the chemical, perchlorate, in different brands of powdered baby formula. It was published last month, but the Environmental Working Group issued a press release yesterday drawing attention to it.

The chemical has turned up in several cities’ drinking water supplies. It can occur naturally, but most perchlorate contamination has been tied to defense and aerospace sites.

No tests have ever shown the chemical caused health problems, but scientists have said significant amounts of perchlorate can affect thyroid function. The thyroid helps set the body’s metabolism. Thyroid problems can impact fetal and infant brain development.

The extent of the risk is hard to assess because the government requires that baby formula contain iodine, which counteracts perchlorate’s effects. The size of the infant and how much formula they consume are other factors that can influence risk.

Dr. Joshua Schier, one of the authors says,

“The study itself sheds little light on how dangerous the perchlorate in baby formula is. This wasn’t a study of health effects.”

Additionally, the largest amounts of the chemical were in formulas derived from cow’s milk, the study found.

Like with the melamine discovery last year, researchers would not disclose the brands of formula they studied. Only a few samples were studied, so it’s hard to know if the perchlorate levels would be found in all containers of those brands.