Families flocked to the St. Lambertus School today, excited to greet the children they had missed so much. But as they arrived, parents, family members and friends discovered that many of the children that had gone on the ski trip to Italy would never return. 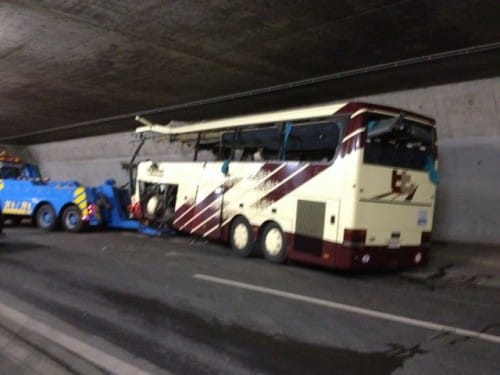 One of the three coach buses transporting the children home from their ski trip to Italy crashed last night, leaving 22 children dead and another 28 seriously injured. Two of the seriously injured are currently fighting for their lives.

The pain and uncertainty that the families and school mates of these children must feel can be described as nothing less than heartbreaking. But even these words discount the suffering and grief they are dealing with. No words can really describe the tragic aftermath in a situation such as this. We can, however, focus on the facts, the tangible.

All of the children on the trip were aged between 11 and 12. They were excited to leave. They enjoyed their time on the ski trip. One of the teachers, also killed in the tragic accident, Frank Van Kerckhove, had helped the children up a blog so that the children could share their thoughts and activities while away on the trip. These words are the last words that some families and friends will ever have.

“Dear mamma and papa. I like it here a lot, but I miss you. Love you. Kisses,” said one of the students.

Photos of the week-long ski trip adorn the blog post as well.

The final post, written by Mr. Kerckhove the night before their departure said,

“Tomorrow will be a busy day and I do not know if I can write a blog posting. But on Wednesday, we’ll be back. All of us.”

Sadly, no one could predict the tragic events that would unfold the night the children made their return. 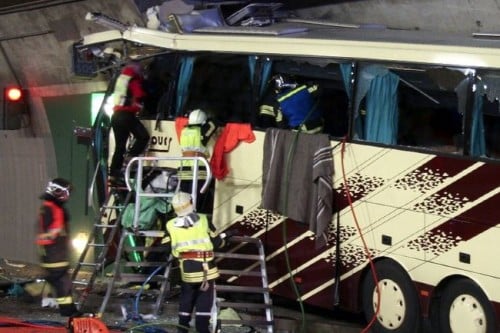 No one really knows why the bus crashed. Initially, it was said the driver was speeding. After further investigation, however, speeding was ruled out as a potential cause of the accident. Weather and the tunnel are not factors in the crash either. Weather conditions were favorable that night and authorities stated that the tunnel is well-lit and it has only been open for about a decade.

According to authorities, the bus had hit the curb inside the long Sierre Tunnel. They then crossed over an emergency stopping area and ran, head on, into a concrete wall. That wall was backed by Alpine rock. With no give to the area they hit and at speeds around 60 miles an hour, the bus didn’t stand a chance. The entire front of the vehicle was disintegrated.

“The impact was terrifying,” stated a senior officer, one of the 200 emergency workers at the scene of the accident.

One of the initial videos reviewed led some to believe that the children had not been wearing seatbelts, which were furnished on the coach. After reviewing the CCTV of the accident, however, authorities confirmed that the passengers were, in fact, wearing their seatbelts.

The likelihood of technical failure seems low. The coach, which was hired by a Christian trade union, belonged to Toptours. They have an “excellent reputation,” according to the Belgian transport minister Melchoir Wathelet.

“The coach is a modern, up-to-date one, and fitted with seatbelts throughout,” stated canton’s chief prosecutor Oliver Elsig. Elsig is also the investigator that ruled out the probability that speeding was the cause of the accident.

One survivor who managed to escape with two broken legs and a broken arm was the first to speak. Her account of the accident has given some insight as to how so many deaths and injuries occurred.

“I felt a hard jolt,” she said. “Then everything went dark. The seats worked loose and were flung around the bus. I was hurled forward and ended up pinned between two of the seats.”

But in the end, the reason for the crash doesn’t matter. What matters is that there are many families that will never see their children again. Some are still unsure of whether or not their children survived the crash. Authorities are still identifying the victims and determining who the next of kin is.

And the families of the children are not the only one’s affected. Entire communities have been floored by the event. Even Jan Luykx, the Belgian ambassador to Switzerland spoke about the accident saying,

“This tragedy will devastate the whole of Belgium. All of the victims came from two villages. The scale of the accident is impossible to digest. We are focusing on the practical aspects of dealing with this tragedy.”

Our hearts go out to the children and their families, their school-mates, their teachers, their communities. May they find comfort and strength in each other and through knowing that hearts all across the world are aching with them during this difficult time.