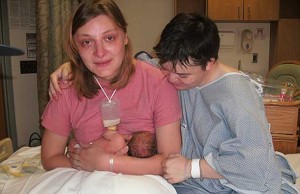 It’s a boy meets girl kind of love story. Love at first site, Emily and Cai, moved in together after just a few short weeks after meeting each other. The couple, still living together, is happier than ever, especially since they have welcomed a little miracle into their lives, Dante. Dante’s conception, however, was anything but “typical.”

Cai, 24, Dante’s father, was born a woman. Cai still has female parts but has been taking male hormones for quite some time now, which should have made him “clinically sterile.”

Emily, 28, born a boy, has been taking female hormones since the age of 16 and should also be “clinically sterile.” At the time of Dante’s conception, Emily still had male parts and was awaiting a sex-swap surgery.

“We didn’t plan on having a baby. We didn’t try to make it happen nor did we think it could happen. We were planning on adopting because, as far as we knew, having a baby on our own was impossible separately, let alone together,” Emily told reporters.

Doctors are baffled by the whole situation as well. It should have been medically impossible for either parent to conceive, let alone give birth. To add to the confusion, Cai was even receiving birth control shots, just to be sure. Yet, here he is, little Dante, a bright, hazel-eyed, now 22 month old toddler -the lucky child of very happy and proud parents.

Each parent has taken on their gender role in the family unit. Emily breast-fed Dante with the aid of formula and a special attachment. Cai stated, “I really do feel like the dad.” The couple plans to explain how he came to be as he gets older, letting him know that there he is no different than any other happy child. “We’ll explain the situation…We will say mummy couldn’t have babies so daddy did it for her.”

Emily has since undergone a sex-swap surgery, now having female parts but Cai says he is happy, just the way he is. “As far as how we see each other, we’re a heterosexual couple. He’s a man but has female parts. I’m a woman that once had male parts.”

Despite the fact that this causes some to recoil or make judgment, the family is happy.

“Regardless of anything else, there is a lot of love in our family. We both adore our son, and the amount of joy he’s brought us is amazing. He is being raised in a loving, nurturing environment. That’s a fantastic way for a child to grow up. Our son is great. He’s perfectly healthy in every way.”