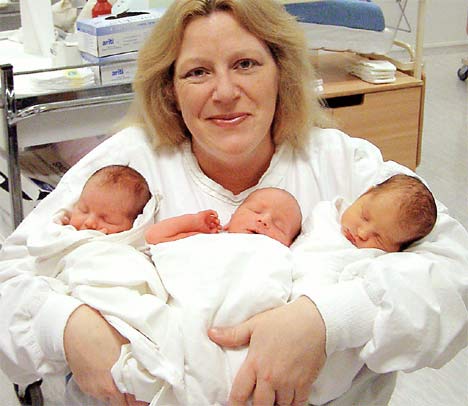 In a few days the babies will be with their new family and Carole will probably never see them again.
For most women this would be a problem, but not for Miss Horlock. Britain’s most prolific surrogate mother – won’t lose a moment’s sleep over it.

“I’ve never had a problem handing the babies over,” she said shortly after delivering the healthy triplets – her 10th, 11th and 12th surrogate babies.

Carole – who also has two daughters of her own – added: “I don’t bond with the babies in the womb.

“With my own children, the bonding came after they were born, as I nurtured and fed them.

“I’ve been cuddling the triplets and I’ve been very involved with them, but they’re not my children.”

The triplets’ parents are a Greek couple in their thirties. The mother, a teacher, had a hysterectomy two years ago following cancer and, although she can still produce eggs, she cannot carry a baby.

Embryos made from the father’s sperm and mother’s eggs were implanted into Miss Horlock’s womb at a Greek fertility clinic.

Doctors urged Miss Horlock to abort one of the triplets, warning that because of her age there was a higher risk they would be born with disabilities, or die during the birth.

They also said that her own life could be in danger. But she refused.
The babies arrived at just over 35 weeks gestation via planned caesarean section on March 15, in Athens. This is pretty good considering that the average gestation of a triplet pregnancy is 33.1 weeks, with the average weight being 4lbs.

In total, Carol has given birth to eight girls and four boys for childless couples – including a set of twins and the triplets.

The 41 year old is planning one final pregnancy for an English couple.

I guess there are many ways of surrogating a baby. I cannot imagine giving away a baby that was created with one of my eggs. Being a womb host for another couple’s fertilized egg is one thing, but having your own egg fertilized by the father to be is complicated.