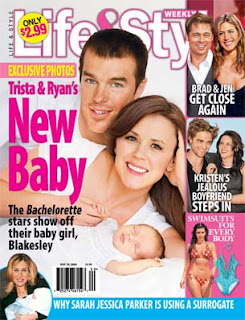 Ryan and Trista Sutter show off the new daughter Blakesley Grace Sutter on the cover of Life & Style. The family opened up their home to the magazine recently to talk about the birth, adjusting to having a new baby in the house and the life-changing decision they made about having more children.

L&S: When Max was born, you had to be put under general anesthesia to have an emergency C-section. How were things different this time around?

This birth was so much easier. Blakesley was born three weeks early, and I did have another C-section, but I didn’t need general anesthesia. I just walked into the hospital and put my gown on, and then my doctor came in and said, “Okay, it’s time.” I didn’t know you could just walk into the delivery room, because the last time, I was wheeled in on a hospital bed!

L&S: What was the best part of the delivery?

Being able to hear her cry when she came out and then seeing her right away. With Max, I was under, and I didn’t wake up until several hours later. But this time I was able to hear her first cry and see Ryan there too.

L&S: How did you come up with the name Blakesley?

It’s a family name. Ryan really loved the name Grace. At first we were calling her Gracie, but then we decided to stick with Blakesley.

L&S: How much sleep are you guys getting?

Not so much! I mean, she’s a pretty good sleeper and sometimes sleeps for four or five hours at a time. But mostly, she’s up every two hours from the time she feeds. I try to take little naps when she sleeps. I also try to sneak in some sleep when Max is with Grandma or taking his own nap. Any new parent will tell you it’s hard, but it’s expected. And it’s a small price to pay to have her. It’s definitely worth it.

L&S: You and Ryan are the only couple from the Bachelor and Bachelorette shows to make it to the altar and start a family. What’s your secret?

You know, it’s so hard to say. I will acknowledge that it’s difficult. You meet under these crazy circumstances, and then you get separated for three months, which was super hard. And I think some people just think they’re ready and then when they see the person again, they realize those feelings just aren’t there. I didn’t set out to be the only Bachelorette to get married. I just feel lucky and blessed that my life turned out this way.

For more, check out this week’s issue of Life & Style