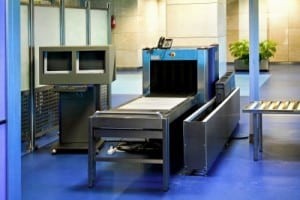 As a mom of two young kids I have often found myself needing to pump whenever, wherever – especially when I am traveling long distances. After all I am the mom who has pumped in the back of a cab and many an airport bathroom.

For this reason I was surprised to read the story of Amy Strand and the controversy over the new mom traveling with a breast pump kit that had empty bottles in it.

While traveling for work between Kauai and Maui on Wednesday the mom of four was stopped by a TSA security agent who told her she would not be allowed to board the plane with empty bottles in her breast pump. Full bottles were acceptable but not empty ones.

The elementary school vice principal was then notified that she would have to leave part of the pump behind(worth $200) or full the bottles with milk.

When she asked where she could pump, she was shown to a restroom, where the only outlet to plug the pump into was by the sinks.

“There was a TSA agent in there using the restroom and I asked her if there was a private place to pump, and she said no,” Strand said. “I had to stand at the sink in my heels and dress pumping as travelers came and went. I was humiliated and fighting back tears. It confuses me why an ice pack and breast pump were a threat to national security.”

“Our officer mistakenly told her that she could only bring the (pump) pack if it was medically necessary, (and) she informed him that she planned to use it later for the storage of breast milk. The passenger was escorted from the checkpoint and later returned with previously empty containers filled with breast milk. She was screened and allowed to proceed with all of her carry-on items. The passenger has contacted us with her concerns and we accept responsibility for the apparent misunderstanding and any inconvenience or embarrassment this incident may have caused her.”

When I flew with my pump I only used the bottles to collect the milk but never brought the milk home.

Over a period of 3 years I probably passed through airport security in both Canada and the U.S. with a pump and empty bottles more than 15 times and was never questioned.

Amy told the Today Show she received a call from a top TSA administrator for Hawaii apologizing for the incident, which she said she appreciated. But she feels more is needed, including additional training for TSA agents.

“What’s upsetting and sad is it’s an example where a TSA agent didn’t know their own policies,” she said. “This is my fourth baby, so breast-feeding concerns aren’t new to me. I can’t imagine how humiliated a young mom breast-feeding for the first time might feel. I’m 38 years old and can stand up for myself. Nothing can take the humiliation away, but if this story prevents another nursing mom from the same humiliation, it’s worth talking about.”

I agree with Amy because traveling as a nursing mom without your baby can be a little intimidating. There never really is a perfect spot to stop and pump and carrying all of the gear does make it a bit of challenge. Add in the possibility of being centered out or humiliated and most moms may not even try. There is nothing unusual about traveling with empty bottles – especially when you are without child. More education is definitely needed.