The last year has definitely been a whirlwind for a Tulsa Oklahoma couple who, after trying for years to conceive, hit the jackpot – welcoming five babies in 8 months! 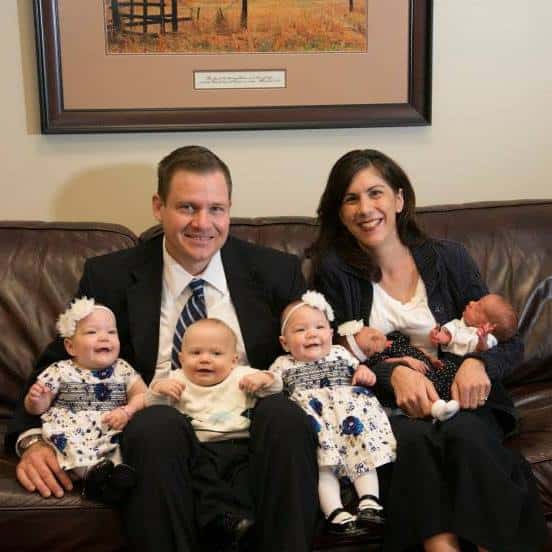 Sarah and Andy Justice had been married 3½ years when their local doctor sent them to a specialist to look into why they hadn’t conceived yet. Discouraged by the possible 30-60k price tag, and slim chance of IVF actually being successful, the couple turned to adoption.

After being selected by a few birth mothers, who ended up backing out, the couple was finally chosen by someone who was expecting triplets.

“Wow! This is great,” Sarah thought. “It’s everything we wanted.”

As many triplets do, the babies arrived two months early weighing only 3 pounds each. While they were in the NICU, Sarah found out she was also expecting.

“We really felt this was something God wanted us to do,” Sarah said. “And sometimes, when you follow God’s will in one thing, it leads to the next thing.”

But God had more in store for the couple! Toward the end of July, when the triplets were a couple of months old, Sarah went for a sonogram to find out the sex of the new baby only to find she was expecting twins!

“That’ll teach me to keep my mouth shut,” Andy told the Tulsa World, laughing. He had had been teasing Sarah about having twins.

Now the triplets, Joel, Hannah and Elizabeth are nine months old and Abigail and Andrew are almost eight weeks.

While on the TODAY show on Thursday the couple revealed they go through about 84 bottles and 300 diapers a week. They tell Hannah and Elizabeth, who may be identical, apart by polishing their toe nails a different color. With their feet covered up for the interview they moved to a different system – positioning the girls’ pink bows on opposite sides of their heads.

“I was shocked and a bit overwhelmed because I got to thinking, added it up and I’m like, wow, if they go to term we’re about five babies in eight months. But we were really excited because it was something we’ve been dreaming of and longing for for years,” Sarah told the TODAY anchors

“It was more than a little ironic,” Andy added

“My husband says all we do is babies, everything else in life has pretty much stopped,” Sarah said. “But it was something we’ve wanted so badly that we love it. It’s not to say it’s not a lot of work and we’re not tired a lot but it’s great. We just really love having these children.”

Thankfully they have a great support system.  Friends and family have been helping them with time and donations,  and their congregation at Eastland Baptist Church keeps them supplied with cooked meals.