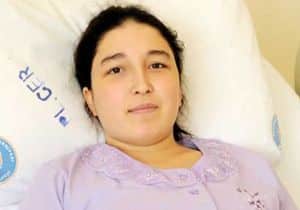 Derya Sert, 22, was born without a uterus. She’s waited her entire adult life to be a mother. When doctors successfully performed the world’s first uterine transplant on her, it seemed there might be a possibility that her dreams could come true. Then, 18 months after the transplant, doctors started IVF treatments in hopes of actually achieving a successful pregnancy.

In April of 2013, it was announced that Derya was, in fact, pregnant. The announcement came from her doctors at Akdeniz University Hospital in Antalya. But since Derya had been the very first woman to ever achieve pregnancy after a uterine transplant, doctors were unsure of what Derya’s or the fetus’s needs would be.

“Since there is scant medical literature on this, the risks for pregnancies is unknown,” Dr. Jennifer Ashton, a senior medical contributor at ABC News said back in April.

But they did know there would be risks. And unfortunately, Derya suffered from one of the worst complications possible.

At eight weeks of pregnancy, doctors were unable to detect a heartbeat.

While, emotionally, she may be heartbroken, doctors do say she’s doing well physically. And, though it may be a while before she’s ready, the hospital says she doesn’t have to give up her dream yet.

“The general health status of the patient is fine,” the hospital statement said. “IVF will be continued when she is ready, in appropriate conditions.”

We’re very sad to hear about Derya’s loss and will continue to hope for a successful pregnancy in the future, when she is ready.