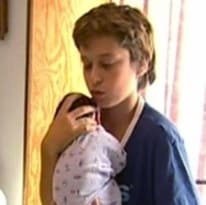 Gaelan Edwards had never thought that one Saturday morning would change his life so drastically. From being a regular 12 year old, Gaelan turned into a hero who helped his mom deliver his baby brother.

At home in Campbell River, B.C, Danielle, Gaelan’s mother, who was expecting her fifth child, could not get out of the bed on Saturday morning.

“I just felt a lot of pressure, and I was laying on my side and I rolled over onto my back,” she said.

She also could not get to the phone and called Gaelan for help.

The baby’s head was already crowning and Danielle explained to Gaelan what to do next.

Gaelan, covered with blood and amniotic fluid, rested the baby’s head on his forearms and then guided the baby out by the shoulders.

When the baby was delivered, he also used a clamp and scissors to cut the umbilical cord and then helped deliver the placenta.  Did we mention he’s 12?

When asked how he knew what to do, Gaelan said he learned from reading medical books, and watching hospital shows on TV.

Danielle says this was her easiest birth. She and baby Kanine were finally taken to a hospital and both are said to be doing well.

“One day when he’s a father, he’s going to look back on this and it’s going to be something he remembers when his own children are born,” she said.