For five of the six years Darla and Mark Pritchard have been married, they’ve been trying to start a family. 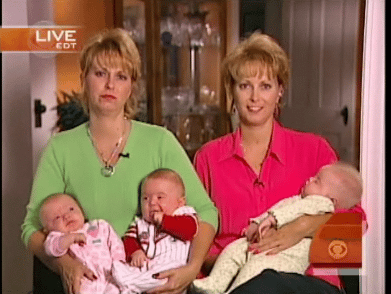 Two attempts at in-vitro fertilization had failed, and they were about to make a third try when Darla’s twin sister, Dana Johnson, offered to be a surrogate, to up the odds of success. Darla and Mark took her up on the offer.

In a twist of fate, both women, 39, got pregnant when eggs fertilized by Mark were implanted.

On Feb. 27, Darla gave birth to twins, Mallory and Wesley and, six weeks later, Dana had a girl, Mattie.

I guess the old saying is true…When it rains – it pours!!