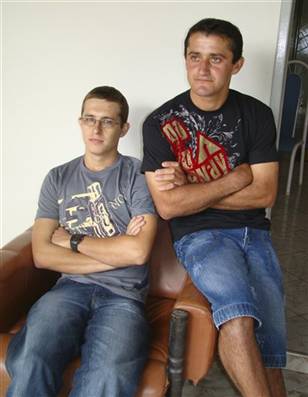 DNA tests have revealed that two Brazilian men were accidentally switched at birth at Madre Regina Protmann Hospital in Sao Paulo, more then twenty years ago. It took the curiosity and suspicion of one of the men to reunite them and their families twenty four years later.

Dimas Aliprandi has always questioned his appearance when it came to comparing his looks to his other siblings.


“There was something different, I had blonde hair and blue eyes and my sisters had dark hair and dark colored eyes. I had the typical features of a descendent of German immigrants, while my sisters and parents were of Italian stock. Something did not add up”.

At the age of fourteen Dimas’ interest was peaked after he watched a news report about babies that were accidentally switched at birth.

“I told my father of my doubts and that I wanted to do a DNA test. But it was too expensive for the family”.

When he turned 24 he decided to take matters into his own hands and paid 300 reals ($166.00) to conduct a DNA test in order to settle the question that weighed heavily on his mind. The results of the DNA test revealed that the couple who raised him for the last 24 years of his life were in fact not his biological parents.

When he broke the news to his parents, Zilda and Antonio Aliprandi, they were shocked and refused to accept that he was not their biological son. After the initial shock set in the Aliprandi’s accepted the news and helped him begin the search for his biological parents.

They began the search at Dimas’ place of birth, Regina Protmann Hospital.


“I showed the hospital the results of the DNA test and told them that they proved that I had been switched at birth”.

The staff of the hospital wanted a second opinion and asked Dimas if he was willing to take a second DNA test to verify the rest of the first test. He agreed to take the second test, willing to do anything to find his biological parents. Three months later the results of the second DNA test confirmed the results of the first test – he was given to the wrong family at birth.

Hospital records revealed that another baby boy, Elton Plaster, was born the same day as Dimas. Dimas the Aliprandi’s managed to track down the Plaster family who owned a coffee farm in Santa Maria de Jetiba just thirty miles (45 kilometers) from Dimas’s home in Joan Neiva.

Dimas said “Elton and I wanted to remain with those who raised us and with our birth parents. We wanted to expand our families”.

The two families are now side by side working together growing vegetables and coffee on their small farm. Dimas and Elton get to keep the parents that raised them and also get to build a new relationship with their biological parents and each other. – Jeff, Staff Writer