At just 2lbs baby Alexandra has already been through more than many will in their lifetime. But the strong little girl is thriving and showing that she is a fighter! 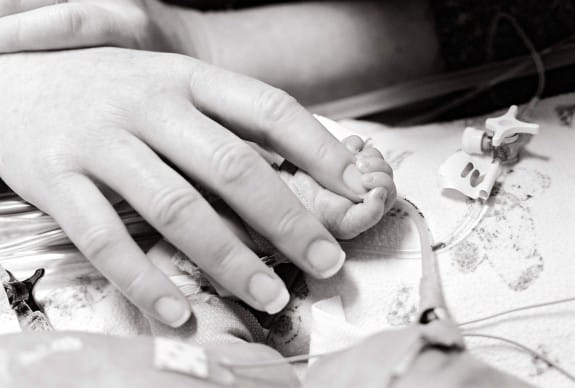 When Heidi Van Kirk was 22 weeks pregnant, an ultrasound showed that her baby was small for her gestation.  During follow up check ups that prognosis for her baby didn’t improve as her baby slipped further down the growth chart.

“They gave her 35 percent chance of making it to a live birth,” Heidi told MLIVE.com

During her 32 week check up baby Alexandra was found to be below the 1 percentile. Three hours later, the baby was delivered by emergency c-section with a full head of brown hair, intense dark eyes – and full of life.

“I think everyone in the operating room was pretty much overjoyed,” the baby’s dad, Matt said. “We were not expecting a vocal birth.”

“She had us all very, very happy when she came out screaming,” Heidi said.

Only 2 pounds, 3 ounces, she was immediately diagnosed critical pulmonary stenosis, an obstruction of blood flow from the right ventricle to the pulmonary artery.

It was also revealed that she had Hirschsprung’s disease, a condition that causes missing nerve cells in part of the colon.  At just 11 days old doctors performed an ostomy operation to let waste bypass the intestines.  But when her blood oxygen level did not rebound like it should after the surgery Dr. Joseph Vettukattil, the pediatric cardiologist at Helen DeVos Children’s Hospital made the decision to do the balloon catheter procedure.

Because of her tiny size Dr. Vettukattil used the smallest tube he had, modifying the top to make it softer to avoid perforating the heart.

The valve defect had caused the right side of Alexandra’s heart to enlarge and rotate a bit so Dr. Vettukattil had to work quickly to correct the defect and also ensure that the catheter did not impede blood flow to the tiny baby’s Artery.

Forty-two minutes later he had inflated the balloon, and ensured the blood flowed freely through it.

Today Alexandra is recovering like a champ and doctors say she won’t need any additional surgeries.

“She’s cured. As far as her heart goes, she should be fine for the rest of her life,” he said.

Now her parents are looking forward to the day when they bring their baby girl home to join her big sister – 17-month-old Josephine.

In the NICU, Alexandra is growing stronger every day.

“We have always referred to her as our Mighty Girl,” Heidi said. “We call her our Mighty, Feisty Girl now.”