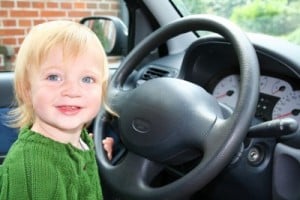 If the summer campaigns about leaving your baby in a car won’t scare you into taking your child in with you, a recent incident in Ephrata Washington might…

Wendy Jo Lasher, 27, had left her two-year-old daughter in the car while she ran in to pick up another child from the local elementary school. While it is unclear as to whether or not the child was restrained in any way, authorities did indicate that the vehicle had been left running.

Like most curious toddlers would, the little girl decided to explore the front seat and somehow managed to pop the gear, rolling the vehicle across a sidewalk and a road until she hit a light pole and a parked car. Thankfully, the car was travelling at a low speed and no one was injured.

It could have been a serious incident however, considering the fact that the toddler would not have been buckled in while messing with the gears. Additionally, two children walking in the street had to dart out of the way to avoid getting hit by the car.

“This is a reminder to parents that, not only is it illegal to leave a child in a car unattended, it’s also extremely dangerous,” said Ephrata police Sgt. Philip Snavely. “This could have been dramatically worse.”

Police say that the mother will face charges of endangering the welfare of children and leaving a child in a motor vehicle unattended.