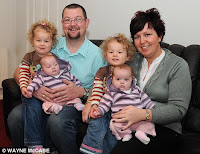 When Adel and Blane Pearson discovered they were having twins three years ago, they thought it was a fantastic surprise. But the couple were stunned when Adel fell pregnant a second time – and learned she was expecting twins – Again!

Now they are regarded as a ‘one in a million’ family by experts because the first set of twins – Grace and Ruby – are non-identical while the latest arrivals – Isla Mae and Isobel – are identical.

All four girls were conceived naturally, without the need for any IVF treatment, and there is no history of twins in their families.

Debbie Ross, membership manager of the Twins and Multiple Birth Association, described the Pearson family’s two sets of twins as ‘practically unheard of.’

Non-identical twins Grace (7lb 6oz) and Ruby (7lb 8oz) were born on December 9, 2005 – although the twist was that the girls look identical.

The amazing nature of this family’s situation has caused them to ‘minor celebrities’ where they live in Colchester, Essex.

‘I can barely go out now, me and the girls are like celebrities. I can’t go shopping without somebody stopping me and wanting a look at the girls.

‘I try to dress them differently but everyone sees through it. People are just fascinated and have so many questions to ask.’