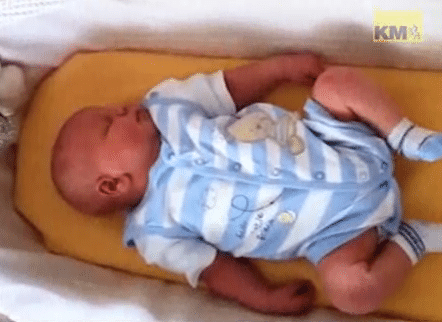 One of Britain’s heaviest-ever babies, Jack George Burt was actually 2 weeks late and refused to come out.  Abby had planned to have a natural birth, but after two failed inductions she was forced to have a C-section.

“I guess the c-section was a blessing in the end as I wouldn’t have wanted to try that!  I think everybody was shocked and amazed. Jason was cuddling him and everyone was saying we want to get him on the scales.

“We used to joke about having a 9lb baby and I said I’m not having double figures.  I thought Jason was joking when he told me. Although Jack is chunky I don’t think of him as being massive – he’s in proportion.”

“When they saw how big he was they all rushed to the scales.  Lots of people came in to see him. We weren’t expecting him to be this big – it was a shock but he’s absolutely gorgeous.”

Now home Jack is already in clothes for babies aged up to six months.

Abby is already mom to Ben, seven, who weighed  just 7lb 13oz when he was born.   She says there is no medical reason for Jack’s size – he has been tested for diabetes which came back clear.

This has been the year of the big baby. In March a California mom welcomed an almost 14lb baby, which was preceded by  a UK mom welcoming a 14 pound baby girl and a Chinese mom a robust 15.5 pound baby boy!