Giving birth can be a life-changing experience. One that is filled with joy, tears, and so much love. It is a personal process in which mom gets to decide how and where she will deliver her child. Many deliver in hospitals, others at home, and some expectant moms use birthing pools for a water birth. However, the latter has been banned in the United Kingdom after a newborn contracted Legionnaires’ disease. But some moms are throwing caution to the wind and defying the ban. 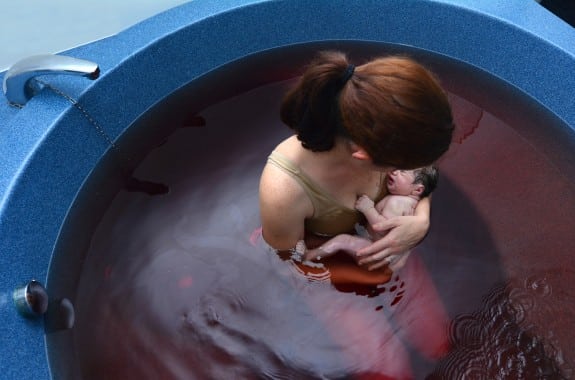 In June, public health officials issued a warning for moms-to-be, cautioning them against birthing pools with recirculation pumps and built-in heaters. These pools can be filled up with water two weeks before mom gives birth. The pools were banned after an infant contracted Legionnaires’ in a heated birthing pool, and has since ended up fighting for its little life.

It has been revealed that some pregnant moms who acquired pools before the ban was handed down, do not plan on giving the pools back. All companies within the country that have advertised heated birthing pools have been subsequently warned by health officials to put an immediate stop to hiring them out. The expectant mothers who still plan on using those pools they received before the ban are putting both their lives, and their newborn’s lives at risk.

One NHS official says, “All the available evidence shows heated home birthing pools can pose a serious risk. It is extremely worrying that this advice is not being heeded. Legionnaires’ disease can lead to life-threatening problems, and may cause organs including the lungs and kidneys to stop working properly.” Just last week Public Health England reiterated the warning not to use these pools as it is being found that more pools being examined have also tested positive for Legionella, which is what causes Legionnaires’ disease.

The infant that is currently fighting the disease was in treatment in an intensive care unit in a hospital, however, PHE has refused to offer any kind of update on the current health of the newborn. One spokeswoman says that the case is being subjected to a police investigation, but did not mention which police force was looking into the matter.

During the investigation by PHE, 10 birthing pools with built-in heaters were tested, by several companies in order to see if they were contaminated with the bug. Currently, six test results came back, with four of them testing positive for Legionella, with three also testing positive for other possibly harmful organisms.

“These latest results have strengthened already serious concerns about the safety of heated birthing pools in the home setting and the potential for contamination from a number of organisms which are recognised causes of infection, and pose particular risks to newborn babies. Consequently, the PHE recommendation remains that heated birthing pools (incorporating both a re-circulation pump and heater), filled in advance of labour, should not be used for labour or birth at home. PHE will review this recommendation if evidence is provided of a safe system for use in the home. However, at this point in time, it appears unlikely that hired-out, re-used, heated pools can be made safe to use for labour or birth in the home setting. We do not have concerns about purchased or hired pools that are filled from domestic hot water supplies at the onset of labour, provided that any pumps are used solely for pool emptying.”