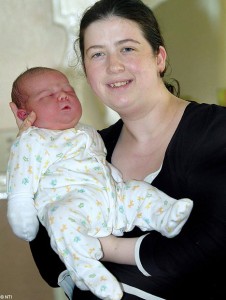 Wowsers! A Uk mom has delivered a baby that weighs twice the average weight of a newborn.

As Amanda Ellerton’s delivery day drew near and then passed she knew that she was probably expecting a bigger than average baby.

But little did she realise quite how big.

Son Shaune was born after a six-hour labour, weighing a hefty 14lb 7oz. And what is more, his 24-year-old mother gave birth naturally!

Amanda arrived at the hospital at 5pm because she was 10 days overdue and the size of the baby was causing her pain.

Hospital staff broke her waters and started the birth which soon became complicated because of the sheer size of the youngster.

His shoulder became lodged behind the pelvic bone and it took four midwives to set him free.

The mother, who lost three litres of blood during labour, said: “I couldn’t understand why he wasn’t coming easily.

“Once his head appeared I could see everyone in the room take a gasp because he was so big. It was very painful but it was all worth it for our big bundle of joy.

“It all happened so fast but they said it was an emergency and only afterwards did I realise how much danger we were both in. If they knew the size they would have given me a Caesarean.

“Afterwards it seemed everyone in the hospital came to see the baby. They were all just amazed by him.”

Shaune is a little lighter than Britain’s heaviest baby, Guy Warwick Carr, from Cumbria, who was born in 1992 weighing 15lb 8oz.

The Guinness Book of World Records says the heaviest baby ever born was to Anna Bates of Canada in 1879. It weighed 23.12lb and died 11 hours after birth.

The world record living new born according the Guinness record keepers was a boy born weighing 22lb 8oz at Aversa, Italy, in 1955.