Babies will arrive wherever and whenever they decide and we have seen this many times over the past six years. Often labour is unexpected and it comes on quicker than the new mom expects and she can’t make it to the hospital in time for the baby’s arrival. Yesterday, however, a UK mom made it to the hospital but workers didn’t come to the door in time so she was forced to deliver on the icy sidewalk outside. 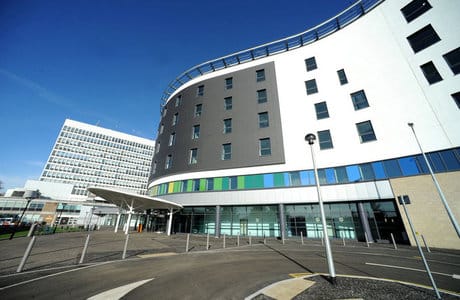 Lisa McNeil told the Daily Record newspaper she arrived at Victoria Hospital in Kirkcaldy with her her partner Ryan and mom shortly after midnight on Sunday morning.  Because of an overnight security system there was no staff at the entrance and the doors were locked.  Determined to gain access the three buzzed the 24-hour security entry system, banged on the door and shouted for help for six minutes with no luck.

Her baby, Jackson couldn’t wait and was born on the icy pavement in minus 4C weather outside the maternity wing shortly after midnight on Sunday morning. Lisa’s mom Karen Barnes saved the 8lb 14oz from hitting his head on the concrete by using Lisa’s cardigan as a safety net.

As expected, the 25-year-old, said the experience was “unbelievable”.

“It was like a horror movie. I was in a lot of pain and bleeding. I don’t remember much because I was screaming in agony for six minutes while we waited for someone to help us.

“They knew I was coming but no one heard us buzzing to get in or our screams for help.

“I don’t think anyone should be put through the humiliation of having to give birth on a pavement outside a hospital in front of strangers.”

When midwives finally came to the door they cut the umbilical cord and took the new mother up to the ward. There she needed stitches but has since been released home.

“It is scandalous and must never ever happen again. I will be calling for an investigation into this to make sure no one has to suffer and be humiliated like my daughter.”

The hospital, which opened the new £170million wing of the hospital at the end of December, issued a statement saying,

“NHS Fife can confirm that when a lady who had phoned ahead rang the buzzer, midwife staff made their way to the front door to admit her. However, labour was so far advanced that delivery took place at the door of the hospital.”

Thankfully mom and baby are healthy.