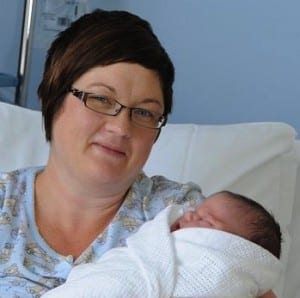 When Fiona Anderson was expecting her third baby, doctors had predicted looking at the scans that she might have a big baby. But Hugh Donald Evans stunned even his mother when he arrived weighing 13 pounds and 10 oz becoming one of the biggest babies born in UK.

For the doctors at the Raigmore Hospital in Inverness too it was a novel experience because they are used to seeing babies half the size of Hugh. Fiona, who also works as a theatre nurse at the same hospital had a caesarean section and the doctors claimed that they had never delivered a heavier baby.

Fiona said, “We had growth scans, so we knew he was going to be large. We were expecting a ten pounder. But 13lb 10oz we were not. We’re absolutely delighted with the birth of our new son but obviously we were both quite surprised at how big he is.”

Also mother to Rhys, 6 and Cerys, 2, Fiona admits though that she is used to having heavy babies.

Fiona was suffering from gestational diabetes during her pregnancy and it is believed that the baby received too much glucose inside the womb which led to his huge size.

Right after birth Hugh was transferred to the special care baby unit (SCBU) because he was having trouble keeping his sugar levels up after birth.

Says Fiona, “Right now Hugh is in the SCBU (special care baby unit) as he was having trouble keeping his sugar levels up after he was born. He seems to be doing better now though and is taking his milk. Hopefully we will both get out of hospital sometime this week and get home to the other kids too.”

The nurses though are finding his presence at the SCBU a bit odd as they are used to seeing much tinier baby than Hugh at the special unit.

”In the SCBU it’s normally just tooty wee babies that are there, so Hugh looks a bit out of place.The SCBU nurses were saying it’s the biggest baby they’ve seen and the staff who delivered him at Raigmore were saying the same thing,” said the new mother.

Recalling the moment of birth Fiona says how she and her partner Glyn Evans were more interested at knowing the gender of the child than his size. It was only moments later when the nurse revealed his birth weight that they knew that they had received a really big bundle of joy.

She said, “When he was delivered, one of the staff held him up and I remember thinking that his bum is really big and then they told me his weight and we were both surprised.”

The new mother says there are good points about Hugh being on the heavier side as then Cerys her two year old won’t be able to pick baby brother so easily.

“In a way it’s quite good because Cerys won’t be able to pick him up so easily. Both the kids are very excited about the new arrival of their baby brother, but he’s a bit too heavy for Cerys at the moment.”

But the same problem may arise for Fiona too as the baby begins to grow. For now the family is just happy giving ‘giant’ hugs to their baby boy.