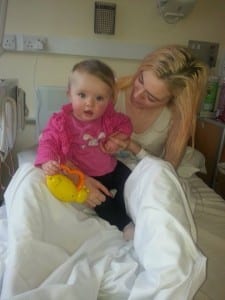 Kayla Bufton of Blackburn, England was 36 weeks pregnant in April 2013 when she began feeling tingling pains in her back. The 24-year-old mother of three first attributed the pain to early labor, but as the pain continued without contractions, she began to suspect a pinched nerve caused by her baby’s positioning. One week later, Kayla was rushed to Royal Preston Hospital in Lancashire with near full-body paralysis – completely unable her legs, arms or facial muscles.

“I was so scared when my body stopped working and I couldn’t feel my baby kicking inside me anymore,” the new mom told the Daily Mail. “My left leg kept dropping and I started tripping up, which I knew wasn’t normal, as I’d never had anything similar with my two other children, Kayden, age 2, and McKauly, age 6.

“I was terrified about falling and hurting my baby, and my whole upper body was tingling and tight. I couldn’t feel my arms properly and I had no feeling in my belly. My face dropped to one side and I was rushed into hospital. The paramedics thought I had suffered a stroke and I was terrified.”

Rather than a stroke, Kayla’s doctors at Royal Preston Hospital tentatively diagnosed her with Guillain-Barré syndrome, a rare condition that affects the nerves that control the body’s senses and movements. In patients with Guillain-Barré syndrome, or GBS, the immune system attacks and inflames the nerves, which causes a tingly, numb sensation in the extremities that can result in a loss of feeling and movement.

As her condition worsened and the paralysis spread, Kayla was attached to machines to allow doctors to more closely monitor her – and her baby’s – condition. She gave birth to a healthy daughter, Kelsey, just one week later – despite being unable to feel contractions during her labor.

“A week after I’d gone into hospital I noticed my belly moving and a team of doctors appeared round my bed,” Kayla told the Daily Mail. “My contractions had begun and I couldn’t feel them.”

Following the birth, little Kelsey was whisked away, while Kayla was rushed to the intensive care unit and intubated after suffering a collapsed lung. Two days later, she suffered a cardiac arrest and was put in an induced coma for a week. Meanwhile, doctors sent Kelsey home with her father, William.

“Two days (after Kelsey’s birth), I suffered a cardiac arrest and was put into a coma for a week, but still couldn’t feel any part of my body when I came round,” she recalls.

It was eight weeks before Kayla was stable enough for her partner, William, and her mother, Carol, to bring Kelsey for a visit. Kayla was still paralyzed, so nursed propped her up with pillows and laid Kelsey on her lap.

“I couldn’t hold her like I wanted to but I was so overwhelmed to finally meet my little girl,” she said. 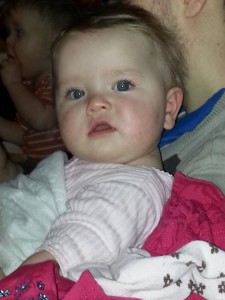 In August 2013 – five months after contracting GBS – Kayla began to regain feeling in her arms and was transferred to the Rakehead Rehab Centre for more intensive rehabilitation. She had to relearn how to speak and use her upper body, and is currently in the process of relearning how to walk. After almost a year of grueling physical therapy, Kayla recently took her first steps and was able to hold Kelsey for the first time.

“I’m so grateful to be getting better and to have my family around me,” she told the Daily Mail. “It feels amazing to be able to hold my little girl in my arms and do all the things I dreamed about while I was lying in hospital. (I)t was the thought of holding her in my arms and playing with my two little boys that gave me the motivation I needed to keep going with my rehab, no matter how tough it got.”

While Kayla continues to work hard on her recovery, her doctors are continuing to run tests in an attempt to establish the cause of her condition.