The journey of Hazel Brown as a mother could have been very similar to all other mothers caught in the daily grind of diaper changes, feeding, cleaning, sleeping and taking care of their baby. But what makes her story extraordinary is the fact that her mother’s job description included taking care of not one but two sets of twins born within 12 months. 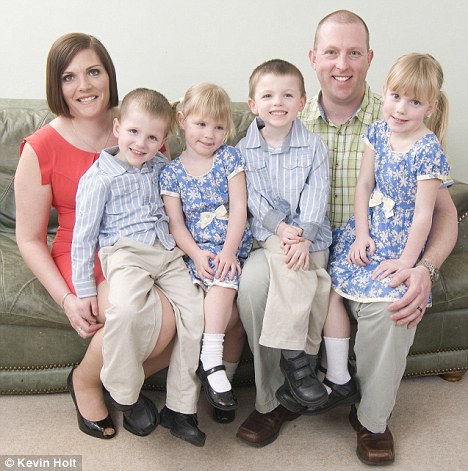 When Hazel, 40 had met Andy 38, through a dating site in March 2003 she already had a daughter named Charlotte and was not looking to extend her family. However, Andy was and three days before their wedding in February 2005, it was a pleasant coincidence to know that she was pregnant.

The 14-week ultrasound results brought more unexpected news when the couple found that Hazel was expecting twins. They had been renovating their 6 bedroom Victorian home to sell and fund their move to Canada but the pregnancy news delayed these plans.

‘I put a brave face on because any baby is a gift, but at the back of my mind I was scared,’ says Hazel. Eventually, she gave birth to twins Hannah and Luke weighing 4 lb 15oz and 4 lb 14oz respectively, at Blackpool Hospital on September 22, 2005, four weeks before the due date.

‘The first time I held them, I felt an indescribable mixture of joy and despair. I kept asking Andy how we would manage but he said: “We’ll find a way.”

They did manage quite well between the two of them, with Andy helping Hazel as much as he could.

Soon after the twins arrival, Hazel began to take the pill again, but when they were four months old she missed her period and panicked. A pregnancy test confirmed her fears that she was among the small percentage of women with whom the pill had failed.

More shock was to come later when the scan at 14 weeks revealed she was again pregnant with twins.

‘On the drive home from the hospital Andy and I didn’t say a word. The thought of a termination crept into my mind, but when I mentioned it to Andy, he said it was something he couldn’t live with – I quickly realised I couldn’t either.’

In order to prepare for the new arrivals, the couple got an eight-seater Mitsubishi and started buying cribs and baby clothes from eBay to cut the costs in spite of knowing the inevitable money crunches they might face in the future.

Hazel also had to face the guilt of not taking care of her twins as much as she had wanted to because of her pregnancy. Andy quit his job as Hazel she entered her third trimester in order to help with the babies.

On September 19, 2006, Hazel Brown once again gave birth to twins Sarah and Connor five weeks early, weighing 5lb 9oz and 5lb 12oz respectively. While the first twins celebrated their birthday three days later, Hazel was still in the hospital and with sorrow, also came the realization of the task ahead. ‘I lay there in tears, feeling I was neglecting the first twins. I blamed myself that Charlotte, too, would suffer and none of them would ever have a normal life.’

The couple struggled hard to make ends meet. They spent £160 on nappies and £80 on formula a month. Even when they moved the first twins to cow’s milk, they had the expense of £140 on shoes, £40 on wellies every three months and double the electricity bill of £120 a month. Hazel even calculated that the cost of sending the kids to full-time nursery would add up to £35,000 a year.

With financial pressure, there was also the physical and emotional stress the two had to deal with. ‘At one point, Andy and I were preparing 24 bottles, getting through 35 nappies and doing four loads of washing every day,’ she says. ‘I got up eight times in the night and the day would start at 5.30am.’

‘I know some women can’t have children and I should feel grateful for having been blessed with twins – twice – but the day-to-day reality was hell.’

To add up to the round-the-clock stress, fatigue, depression and the constant financial worries, there were harsh comments from strangers when they did manage to go out as a family. The pressure became so unbearable at one point that the couple even considered separating.

Marriage counseling and a change of perspective led the couple takes pleasure in small things in life. They realized the special bonding the twins shared with each other. As the infants turned to toddlers, the pressure also reduced a bit. Today, when the two sets of twins are four and three respectively, Hazel realizes it is the extraordinary birth that made her and Andy stronger people and strengthens their relationship. Although everyday challenges are still part of their lives, they have definitely found happiness with their unique family. – Atula, Staff Writer