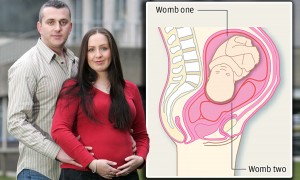 A new mother who has two sets of reproductive systems has surprised doctors and the medical world by giving birth to a healthy baby girl. LINDSAY HASAJ, who was diagnosed with a dual reproductive system or uterus didelphys in November, gave birth to Mirela Elizabeth by Caesarean section last week. Although eight in 10,000 women have some form of uterus didelphys only one in a million have Mrs Hasaj’s anatomy.