When Amanda Hurst had her son fives years ago, her plan was to breastfeeding for the first 6 months and then stop. Now, five years later she is still breastfeeding him and proud to let him make this choice. 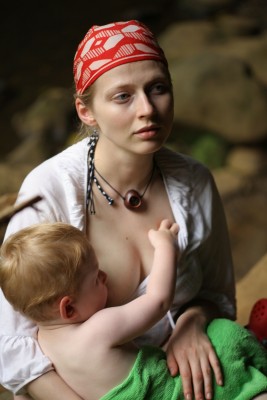 “Once I gave birth to Jonathan and I started breastfeeding, I thought we’ll just get to six months and then I thought we’ll go to a year and then it never stopped. And here I am five years on. It became a natural thing,” said Hurst in an interview with the BBC.

Though it is rare to continue breastfeeding for so long, most experts agree that extended breastfeeding is not a concern. Both the WHO and the American Academy of Pediatrics say that breastfeeding can continue for as long as both mother and child want to. According to the AAP:

There is no upper limit to the duration of breastfeeding and no evidence of psychologic or developmental harm from breastfeeding into the third year of life or longer.

However, not everyone is comfortable with the decision of mothers to continue breastfeeding past infancy. Hurst herself stopped breastfeeding in public when her son was three years old to avoid the negative reactions that others can have. Despite the reactions from others, breastfeeding toddlers and preschool aged children is more common that many people think. Though perceptions are slow to change, the mothers who make this choice, like Hurst, know they are doing what is right for their families.

“I know I’m doing the right thing and I’m a firm believer in children having their own choices and in doing what’s right for you and your family and I made those choices for my family,” Hurst stated.

Despite the typical negative comment, breastfeeding does not last forever. Most children self-wean by the time they are school aged, often losing their ability to suckle correctly as they age and grow. – Summer, staff writer