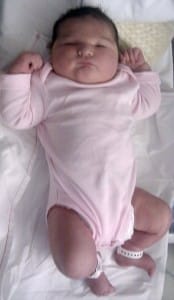 It is the season of big babies in UK. Just a couple of days after Suzie Tevendale was born naturally weighing 12lbs and 12 oz, UK mom Elaine Martin gave birth to her baby girl Niamh weighing a whooping 14lbs 4oz at birth, making her possibly the heaviest newborn in UK.

32 year old Elaine is a nurse at Ipswich hospital at Suffolk where she delivered her baby girl. She says that she and her partner 34 year old Sean O’Halloran have no idea why their daughter was born double the weight of an average newborn.

Says Sean who is a research scientist,

‘We always knew she was going to be big and were told to expect her to be 10lbs to 11bs – but it was a real shock that she was so large.I was in the operating theatre and you could see she was enormous. Then when she got weighed, I thought “bloody hell”.”

He also recalls how even the doctors were shocked to see such a big baby.

“Everyone in the theatre was shocked and surprised. We were told that she was probably the biggest ever baby at the hospital – but now it looks like she is the biggest girl ever born in Britain. Her birth weight was even off the scale for the charts in her personal NHS health record booklet. Her size didn’t really sink in at first. We were just so elated and pleased that she had been delivered safely and was perfectly healthy.”

The couple live in Ipswich and have been together for three years. Last year, they planned to start a family. When Elaine was pregnant, the doctors  predicted that the baby was going to be more than average size and asked her to come in for frequent checkups and scans.

Says Sean, “’We first got an indication that Niamh was going to be big when Elaine had her first scan at 20 weeks. She ended up having more scans than usual during her pregnancy because of Niamh’s size as the doctors wanted to monitor her.”

He also adds that despite doctor’s warning the couple did not believe their first born was going to be so big.

‘Elaine and I are a bit bigger than average build – but she did not have any cravings during her pregnancy and ate normally. We had no reason to think our baby was going to be so large.’

A day before her due date, doctors feared Elaine might have gestational diabetes so they tried to induce her but failed. It was then decided to opt for a caesarean section.

On November 8th Niamh was born with a full head of dark hair and wearing baby outfits meant for three to six month olds.

The little girl did lose some weight soon but now at three months weighs a healthy 14lbs 11oz.

‘We were a bit worried when she was losing weight and used to wake her every four hours to feed her,” Sean says. ‘But by Christmas we started to let her sleep through the night and she did. She is a brilliant baby and is very placid and quite content.”

“She is still bigger than average build and her weight is currently in the top 15 per cent for her age. She still wears clothes for babies aged three to six months, but she is almost too big for them.”

Elaine says that she personally never thought she was carrying a big baby until her work collegues and doctors noted how big she was.

Elaine said, ‘I didn’t notice at first that Niamh was so big when I was pregnant until my work colleagues started saying that I was huge. I had a bit of a bump at my front, but looking from the side I was really big. It got difficult for me carrying her around in my final month of pregnancy. When I was 36 weeks pregnant and four weeks off her due date, an ante-natal doctor told me that she was already the size should be at 40 weeks.”

She adds though that she did not over indulge.

‘I had a balanced diet all through my pregnancy, but in the later stages I did get indigestion and I started having a lot of milk and peppermint to settle my stomach.’

The heaviest baby boy in the UK was 15lbs 8oz Guy Carr of Barrow, Cumbria, born in 1992, while the world’s heaviest recorded surviving baby was a boy born weighing 22lb 8oz born in Aversa, Italy, in 1955.