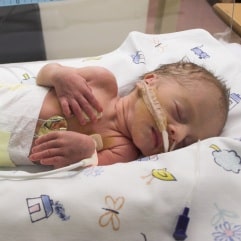 UK researchers are working on a sensor that would be put in neonatal units and help detect a condition in premature babies. The condition affecting the bowels is usually detected when the baby is already critically ill, making it harder for treatment.

Researchers from  Birmingham and Bristol are working on the sensor with funding from children’s charity Action Medical Research on a serious bowel problem in infants called necrotizing enterocolitis (NEC). The condition is so severe that every year almost 30 percent of babies detected with the condition die and most others have long term problems. 3000 babies in UK are detected each year but only when the problem is at a critical stage.

“No current test can reliably identify babies in the early stages of the disease so we are really pleased to be funding this important research project which could make such a difference to babies’ lives.”

The condition occurs without any warning and premature babies who are already very fragile, need emergency surgery to remove the damaged parts of their intestine.

Survivors have prolonged health problems like difficulty in gaining weight, severe infection, liver problems, and difficulty with feeding. This can also mean that many of the babies have to be fed through a tube that is directly attached to their blood stream.

The researchers are hoping to develop the sensor that can be easily used along the baby’s cot in the neonatal units. It will detect the presence of gases or more specifically volatile organic compounds that are emitted with the baby faeces early on with the disease.

Once the project stage is complete, clinical trials will follow and lead researcher Dr Andrew Ewer, from the Neonatal Unit at Birmingham Women’s Hospital will be recruiting babies to take part in the study.

Elaborating on the research Dr Ewer said, “In earlier work, we made an exciting discovery, which we believe could lead to a major breakthrough in the diagnosis of NEC. Our research found preliminary evidence that suggests the composition of a baby’s faeces changes in a characteristic way if he, or she, develops NEC.”

“We think that these changes begin early in the disease process, before the baby experiences any obvious symptoms and we want to study a larger group of up to 1,200 premature babies, who were all born at least six weeks early,” he added.

Researchers at Bristol Royal Infirmary, University Hospitals Bristol NHS Foundation Trust and University of the West of England in Bristol, are undertaking the laboratory work. They will be analyzing the gases to arrive at fast results that may reveal if a baby is suffering from the condition.

If the sensor is successfully tested, it will be a major breakthrough in saving millions of premature babies from a life-threatening condition.