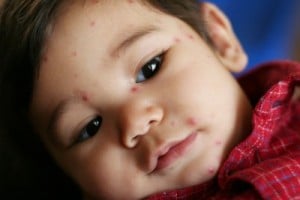 If you’re a parent, it’s likely that you remember having the chickenpox, or, at the very least, you know someone who has had it. But since we’ve had children, a vaccine has been made for chickenpox. Licensed for use in the United States in 1995, the Advisory Committee on Immunization Practices recommended that all children receive the vaccine. It was shortly after that the Kaiser Permanente Vaccine Study Center began their research on the effectiveness of the vaccine.

Based on 14 years of data, the Kaiser Center followed 7,585 children who were between the ages of 12 and 23 months at the startup of their study. Their goal was to determine the long-term effectiveness of the varicella vaccine against both chickenpox and shingles. They also looked at the results of adding the second dose of varicella, which became available in 2006.

Prior to the vaccine, over 90 percent of adolescents ended up with chickenpox before the age of 20. Over the length of the study’s follow-up period, children from the study were 9 to 10 times less likely than children before the vaccine to contract varicella. A total of 1,505 breakthrough cases were reported (“breakthroughs” are when a child contracts the disease even though they’ve been vaccinated). Overall, researchers said the vaccine provided a total rate of effectiveness of about 90 percent. Regarding the varicella vaccine and shingles, researchers noted there was a 40 percent drop in reported cases.

Breakthrough cases of chickenpox seemed to decline with time, and there were no rises reported over the 14-year period. What’s more, the vaccine seemed to provide some level of protection, even to those that did contract the illness. Prior to the vaccine, most cases of chickenpox were severe (more than 300 lesions). However, after the vaccine, very few severe cases were reported. In fact, most of the reported breakthrough cases were considered mild (less than 50 lesions). Additionally, no breakthrough cases were reported after the second vaccination became available. Lead author Roger Baxter, MD, co-director of the Kaiser Permanente Vaccine Study Center believes that the vaccine’s increasing success was “the result of vaccine failure occurring early, while breakthroughs became rare due to high vaccine effectiveness both directly and through herd immunity.”

Previous studies would suggest that Baxter’s theory is correct. One study by the CDC, released in 2011, found that the vaccines helped protect small infants when they were surrounded by already vaccinated children. A Yale University study from 2011 found that double doses were more effective than just one. And a study from the National Center for Immunization and Respiratory Diseases from 2011 reported that chickenpox may soon be completely eradicated in the United States; they found that deaths from the illness since the vaccine have been slim to none.

“Clearly, the vaccine is a very effective tool in preventing or limiting the severity of chickenpox in young people,” Randy Bergen, MD, chief of outpatient pediatrics at Kaiser Permanente’s Walnut Creek Medical Center and pediatric infectious disease consultant told Medical News Today. “As with any vaccine, the rate of vaccination has a huge impact on effectiveness. The more children vaccinated, the more effective the vaccine is for the entire community. At Kaiser Permanente, our use of a comprehensive electronic health record, Kaiser Permanente HealthConnect, enables us to quickly identify children in the targeted age ranges who have not been vaccinated, and to reach out to their parents to ensure they get the shots. Keeping vaccination rates high confers benefits on the community as a whole because there are fewer children who can contract and spread the virus.”