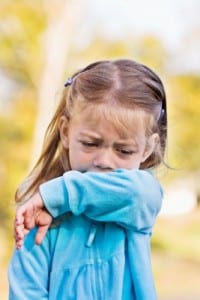 Pertussis, otherwise known as whooping cough, is a highly contagious bacterial disease that closely mimics the common cold: runny nose, nasal congestion, sneezing, red and watery eyes, a mild fever, and a dry cough. And, much like the common cold, after a week or two, the symptoms get worse and thick mucus may build up in the airways, causing an uncontrollable cough. There is one big difference between the two, however. Whooping cough ends with a high-pitched “whooping sound” when the breath between coughs occurs. In children, it can be fatal.

Whooping cough used to be extremely common: hundreds of thousands of illnesses and thousands of deaths occurred each year. But in the 1940’s, scientists developed a vaccine that used the actual pertussis bacteria. Shortly after the introduction, the number of cases in the U.S. dropped drastically – fewer than 5,000 cases each year.

Unfortunately, there were some rather serious side effects to the vaccine that ranged from pain and swelling at the injection site to brain damage. So, scientists came up with a new vaccine in the 1990’s. This new version used only parts of the bacteria, rather than the whole thing. Side effects were noticeably diminished, but so was the efficacy of the vaccine.

At first, there wasn’t really a way of knowing whether or not the new vaccine carried the same efficacy as the old one; it would take several years because researchers needed data on children that had never received the old version of the vaccine. But finally, they had enough evidence; what they determined is nothing short of disturbing.

Whooping cough cases started to climb shortly after the new vaccine was developed. In fact, the number of cases sometimes reached 25,000 a year. Even more unnerving is the fact that the number of children between the ages 7 and 10 that became sick with whooping cough rose from less than 10 percent before 2006 to nearly 40 percent in 2012.

In a study that involved 277 fully vaccinated children aged 4 to 12, along with children of the same age that had not received their whooping cough vaccine, Dr. Nicola Klein and her colleagues found that the risk of getting whooping cough for vaccinated children increased by about 42 percent just a year after a child’s last shot. (Five doses are given, starting at two months. The final shot usually is given between the ages of 4 and 6. A follow up booster is given between the ages 11 and 12.)

Scientists have now agreed that something needs to be done to increase the vaccine’s efficacy, either by developing a new one or offering an additional booster shot. For the time being, however, the vaccine currently available is “still the best thing we have,” according to Maxine Hayes, health officer for the Washington State Department of Health who says that it’s important for parents to not mistake the waning effectiveness for ineffectiveness. While vaccinated children are ending up with whooping cough, it isn’t as bad as it could be.

Omar Gonzalez of North Richland Hills, Texas, stands behind Hayes’s statement. His 11-year-old son ended up with whooping cough, despite the fact that he was fully vaccinated.

“Imagine seeing your son gasping for air,” Gonzales said. “This is really bad.”

The self-employed investment company owner says he spent weeks for caring for his son. Then, he caught it too.