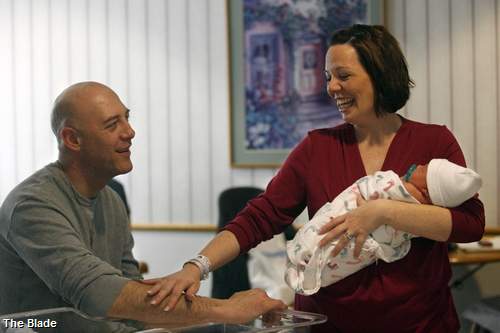 For Jamie Philips, happiness came in double amounts when she experienced marital bliss and motherhood all at the same time on the same day.

Jamie and Mark Philips had planned their wedding two weeks earlier thinking that they had ample time before the baby arrived who was due on 7th March. But the baby surely had other plans when he made his presence felt as soon as Jamie was walking down the aisle and started contractions.

The bride thought it was a false alarm and continued with the ceremony. It was only after her water broke at the reception that Jamie was rushed to the hospital in Sylvania in her wedding dress, where she delivered the little baby boy named Tova.

We’d never seen anything like it,” nurse Meghan Junga recalled. “We were excited. It was very fun. She made my day.”

The new parents had wanted to do the ‘right thing’ before they had a baby and it seems the baby too thought it was the perfect day to come into the world. – Atula, Staff Writer.