Home » What is Placental Abruption?

The placenta is an essential structure for fetal growth and development. When it separates from the uterine wall – a condition known as placental abruption – the health of both mom and baby may be placed at risk. Learn more about this condition, including its signs, symptoms, and treatment, with help from the following information. 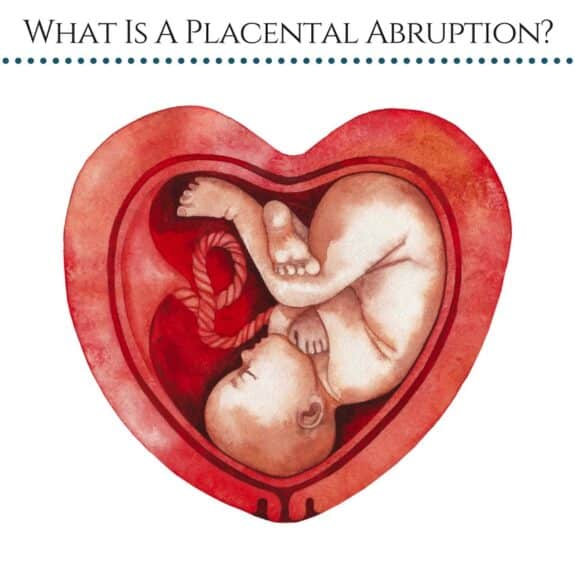 Separation of the Placenta

Oxygen and nutrients are transferred to your baby through the placenta, but if placental abruption occurs, it may interrupt this critical process. Most common during the third trimester of pregnancy, the condition is considered somewhat rare (occurring in only about one percent of all pregnancies), but it can lead to fetal death and complications for the expectant mother if not diagnosed in a timely manner. As such, pregnant mothers are urged to seek immediate medical treatment if they experience any of the following symptoms:

While there is no known reason for placental abruption, certain mothers are considered at a higher risk than others. These mothers are those who:

Placental abruption is not the only condition with the previously mentioned symptoms. Placenta previa, a condition in which the placenta either covers or sits near the uterine opening may also cause vaginal bleeding and tenderness in the uterus and abdominal area. To try and determine which condition a mother may be experiencing, doctors may run the following tests:

Unfortunately, even with an evaluation, true diagnosis of placental abruption cannot occur until after birth, when the placenta can be examined. As such, doctors may err on the side of caution if they suspect that placental abruption may be an issue.

Although a diagnosis of placental abruption can be extremely frightening – particularly because of the risk of fetal death – worst-case scenarios involving infant mortality are relatively rare (occurring in about 15 percent of all cases). However, prompt diagnosis and treatment are still critical and will depend greatly upon the severity of the abruption, location of the abruption, and stage of the pregnancy.

In situations involving a partial separation with a stable mom and baby, bed rest and close monitoring may be all that is needed until delivery. However, in situations of fetal distress or in the case of a total separation, transfusions and other emergency treatment may be necessary. If, after such treatments, the baby is still in distress, he or she may need to be delivered (via cesarean, if there is bleeding or signs of severe distress). While this can place the baby at risk for premature birth complications, this is generally a more favorable outcome than continuing the pregnancy.

If you learn that you have a placental abruption, it is important to stay in close contact with your doctor, even if your situation is not currently emergent. Contact your doctor if anything changes in your condition and, in the meantime, seek support from friends, family, and other mothers who have experienced the same situation. Follow all your doctor’s orders, including those pertaining to seeking emergency treatment for any further complications.