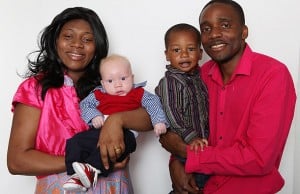 They cannot decide whether to call it twist of fate or one of nature’s wonderful miracles, but the Tshibangu’s are surely getting a lot of attention after the birth of their second son who is not an albino but is fair skinned and blonde unlike his parents or sibling.

When Daniel was born on March 4th there was a sudden hushed silence in the operating theatre. The doctors and the nurses were stunned when they lifted the baby.

Recalls new father Francis, “I was clutching Arlette’s hand as they lifted Daniel from her. He was covered in blood… but then I saw his skin was white and his hair was blond. My jaw dropped open.”

Even experts could not understand this strange birth. They confirmed that baby Daniel was perfectly healthy, was not an albino and had not other kind of skin pigmentation.  Yet, while his parents and older brother Seth, 2, were dark skinned, Daniel was white.

Francis says, “My first thought was ‘Wow, is he really mine?’.  I was too stunned to speak and I could see the doctors ­looking at each other, thinking the baby couldn’t be mine. Then Arlette and I looked at each other and smiled and I knew he was.”

There was no question of infidelity between the couple. They had been with each other for the last three years and were totally committed.

“I have been with my wife for three years so there was never a question of ­infidelity, but seeing his white skin was a surprise to say the least,” says Francis. “The initial reaction from the nurses must have been that Arlette had had an affair. Their faces were a picture, but then I’m sure mine was too. I’m sure they were thinking ‘oh my gosh… what has been going on here and what’s he going to do?’

The parents however just knew that the baby was their own.

“While the nurses were marvelling at Daniel’s blond hair, neither Arlette nor I said a word. We were just in too much shock at his white skin. When I bent down and kissed him I got a better look at his features and could see he looked just like me and Arlette. He has my nose and my wife’s lips.”

They consider Daniel their blessing.

“All we can say is that Daniel is our miracle and, though we are shocked by his white skin, we feel very blessed – he’s beautiful.”

Experts meanwhile are finding it hard to explain why the couple has one black and one white child. The parents also do not have any relation in their families who is white.

Being the mother of such a unique child, Arlette too had a strange experience from the moment Daniel was born.

“I stared at Daniel with my eyes wide. The looks on the faces of the doctors and nurses said it all… everyone was wondering why I had a white baby. But as the nurse put his little pink body in my arms I bonded with him instantly. When I looked at him all I felt was love. Like any mum who has just given birth, my main concern was that he was healthy, which he is.”

She also believes that people do have fixed notions in their minds when thinking about their future baby. Therefore, it was surprising for them too to find Daniel so different from his brother Seth.

“When we pictured having a second baby, I guess we just imagined a mini Seth… who is black just like us. It is just an amazing twist of nature. I don’t know why these things happen. All you can do is take life as it comes, these things are God’s choice. There was a fleeting ­second of worry but I love my husband and I know he loves and trusts me so I knew it would be OK.I have never cheated on Francis and I never will. I was in shock too when I saw Daniel and I think that was evident from my expression.”

Back home too life is bringing strange encounters and weird looks from strangers everyday but the Tshibangu’s are proud of the newest member of the family and not trying to hide him from the extra bit of attention he draws.

“We never try to cover Daniel up to avoid the looks as that wouldn’t be fair on him.But we dread him crying while we are in a shop or on the street. You can see people looking at us thinking ‘What are that black couple doing with that white baby?’ I am sure there are a few people who think we have stolen the baby,” says Francis.

He remembers how a man sitting opposite to them in a train could not help staring at the baby and the family.

“Just the other day we were on the train with Seth and Daniel and I could see out of the corner of my eye the man opposite staring at us. Every time I looked up he would quickly look down at his newspaper but I could see he was trying to figure it out. Sometimes people are much more open about it though, and on the same journey two old women were talking about us pretty loudly – though I think they thought they were whispering.”

“They gestured over to us and ­wondered why Daniel was with us. It can be very awkward. Arlette in particular is very shy so doesn’t like all the attention. But while Daniel may be white with blond hair, he looks exactly like us. He is the spitting image of his big brother Seth, just a different colour.”

The couple was also hesitant initially telling their family about the good news. Francis who is originally from Congo but has lived in UK for the last 10 years says it was actually lucky for them to have Daniel in UK rather than his being born in Congo.

“I rang my mum Monique and the first word out of her mouth was ‘Wow!’ But she was thrilled to have her new grandson and said the most ­important thing was that he was happy and healthy.Like her, I feel lucky Daniel was born here, where things are more medically advanced. In Africa I don’t think they would understand that these sorts of crazy things can happen. Had he been born in the Congo there would have been a lot more questions about Arlette’s ­fidelity and it could have put a real strain on the marriage.”

Arlette and Francis had met in Congo in 2007 and married a year later. They do believe that there was a white birth in Arlette’s family 6 generations earlier but they can’t be sure. Presently, they are a bit concerned though about the child’s growing up fearing he would be taunted and troubled by people.

“Mainly we fear people will taunt him and ask him lots of questions. Children can be cruel and we feel very protective of Daniel.When the boys are older and we take them out together people will assume we are taking our son and his white friend.We don’t want people asking him if he’s adopted or him feeling ­self-conscious if he calls out ‘mummy’ in the ­playground.”

Francis hopes Daniel will be able to cope with big and small questions dropping his way as he grows up.

“For us it’s important that he is friends with everyone and every race. Daniel will have a lot of questions and we won’t be able to give him the answers. Even just filling in a form will open a can of worms. When it asks your ethnicity what box will he tick? Who knows exactly what the future holds? We will have to discover that together as he grows up. To us, his skin colour isn’t important. The most important thing is that we have a very healthy little boy who we love very much.”

He does believe that God gave them a very special gift.

“We call him our special baby, he is our gift. God works in mysterious ways and I’m not sure why he chose us – we are just normal people – but I’m glad he did and we couldn’t be prouder, of both our special boys.”

While Daniel’s arrival is rare, we have covered other families in the past who have had the same surprise in the delivery room!