A Massachusetts woman, who was admitted to the hospital earlier this week with severe abdominal pain, was stunned to find out she was expecting a child! 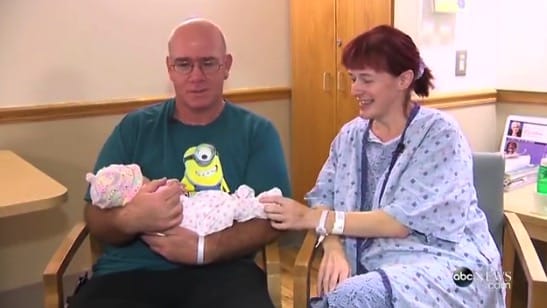 Initially Judy Brown, 47, was thought to have a gall stone, before medical staff figured out she was actually in labor.

“(The doctors said,) ‘It’s good news there’s no blockage, you are pregnant and you are going to have her now!'” she said.

“It was a little bit scary getting into the hospital thinking something was really bad was going on,” Judy told ABC News. “To understand and take in that was I pregnant and was about to go into labor … it was very overwhelming.”

Judy was joined by her husband of 22 years, Jason Brown, when she gave birth to a healthy 8-pound, 2-ounce daughter only an hour later. 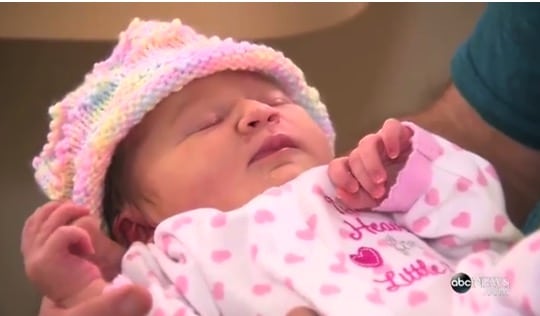 At this stage in her life, the new mom said, it hadn’t occurred to her that she might be pregnant even though her body was going through changes.

“After being married for 22 years, it really wasn’t coming up being pregnant,” she said. “It was not really there in my mind.”

Judy did have a bit of a belly, but she attributed it to her age.

“I felt like I was turning into my mother,” she said.

In order to leave the hospital, the couple had to borrow important baby items like a car seat and bassinet. The baby’s arrival, however, has been a welcome surprise for the pair, who have no other children.

“When she cries I am there,” Jason Brown said.

Dr. Kimberly Gecsi, an obstetrician and gynecologist at University Hospitals Case Medical Center in Cleveland, said while rare, some women do not realize they’re pregnant until shortly before giving birth.

“People don’t know sometimes or they’re in denial about it and denial can be pretty strong,” Dr. Gecsi said.

Gecsi said women even in their late-40s should be aware that they can get pregnant and should continue to use contraception until they talk to their doctor about stopping because of menopause.

“Most physicians who see women in their 40s should be counseling them on [contraception,]” she said.