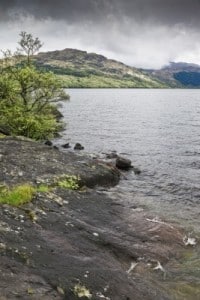 
The unnamed woman was driving a Toyota Rav 4 yesterday when her car slid off the steep slope. The car then plunged straight 80 feet down into the Loch Ness. Emergency crews said they were extremely lucky because the car did not flip over as it slipped from the steep embankment.

A Northern Constabulary spokesman said, “They are very lucky. The car left the road and went down the embankment. It came to rest on its wheels in about eight inches of water. They could have ended up on their roof in deeper water, so the outcome is very fortunate.”

“Looking at the marks, its seems the car went straight into the water, rather than flipping over. It could have been much worse, because it is a very steep embankment and if they rolled then who knows what could have happened.

“It could have been much worse, even a tragedy. Thankfully the woman and girl were not seriously hurt.” 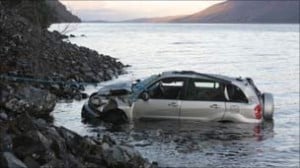 The woman and the toddler were taken to the Raigmore Hospital and are said to have suffered minor injuries that are, thankfully, not life threatening. – Atula, Staff Writer