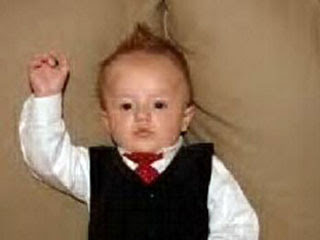 Miami Police have arrested a 22 year old woman for supplying false information to police for a crime after she reported a 6-month-old boy missing who doesn’t actually exist.

Megan McCormic admitted that she invented the child, whom she called Riley Archer Buchness, to lure ex-boyfriend John Buchness to Miami to meet his supposed son. She claimed her infant son had a mohawk and a tattoo.

She supplied police with a picture they believe was taken from the Internet and told police her son had disappeared on Tuesday with a nanny named Camille. It was later revealed that she has no children, but did miscarry six months ago.

Police now want her to pay for the resources that were used to locate the nonexistent child. Nearly 20 detectives worked the case throughout all of Christmas Eve and Christmas.

”We’re always on call. We’re always here,” Miami police spokesman Willie Moreno told the Herald. “But what’s really nasty about it was the tremendous manpower and hours she used.”

He told the newspaper detectives became suspicious of McCormic’s story because of inconsistencies in her story. She admitted to lying to the police around 6 a.m. Friday, police said.

“It was not just telling a little white lie to her boyfriend,” Moreno told the Herald. “Those resources could have been used for someone in real need.”

It is sad that 20 people had to be away from their families during the Christmas season because this girl needed some attention. SOURCE