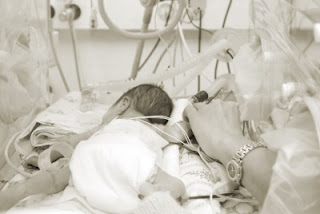 There was excitement aboard a flight from Islamabad to Britain when a six-months pregnant Pakistani woman spontaneously gave birth to a premature baby, forcing an emergency landing in Warsaw.

“The pilot had to make the decision to land as quickly as possible. Warsaw’s Okecie airport was the closest,” Jakub Mielniczuk said about the Pakistan International Airlines flight.

“The woman was six months pregnant. The airport doctor had to revive the premature baby who was immediately taken to a Warsaw hospital in a serious condition,” he said.

While few details are available, the baby is said to be alive, but receiving care at a local hospital.

We wish both mom and baby well. Delivering a baby in a hospital is hard enough. I can’t imagine doing it on an airplane. This woman is a trooper!