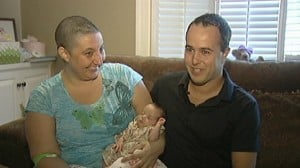 Rebecca Byrne was excited to find out that she was finally pregnant, then devastated to find out she had breast cancer. After a battle to continue her pregnancy despite the cancer, she has finally given birth to a tiny baby girl. And she could not be happier.

Rebecca was advised by her doctors to end the pregnancy so that she cold receive the powerful drugs and chemotherapy that would save her life. After a difficult decision, she and her husband decided to continue the pregnancy against the odds and hope for the best outcome.

“You’re still worried about is this the best choice for me? Should I just have the strongest treatment for my survival? Or is this the best thing for her? How is she going to be affected by the chemo?” said Rebecca 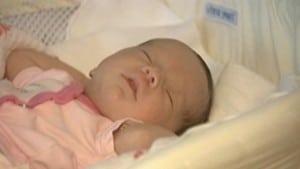 Rebecca had her baby, a girl named Emelia, nearly one month early on July 30. Though she weighed only 3 pounds and 9 ounces, she was healthy and thriving well. After 26 days in the hospital, Emelia was released home to her parents.

Now, however, Rebecca faces the big challenge of fighting cancer on stronger terms. She has begun the powerful chemotherapy treatments. She has just finished the third of her twelve treatments that will hopefully stop the cancer.

“Right now my focus is just to get healthy, get this cancer out of me and be a mom for Emelia,” said Rebecca.

Rebecca was able to receive very mild chemotherapy treatments during her pregnancy due to Dr. Ann Partridge of the Dana-Farber Cancer Institute in Boston. She also had frequent ultrasounds to make sure the pregnancy was going well through-out. – Summer, staff writer